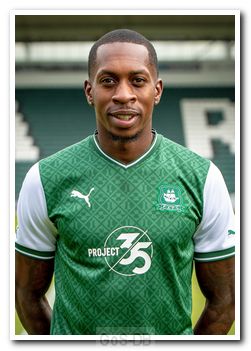 Came from: Rotherham United   Went to:

Miller became Argyle's second recruit of the 2022 summer when he signed a two-year contract in the last week of June.

Born in Croydon, 15-year-old Miller began his footballing career at the nearby Carshalton Athletic Academy, and two years later he made his first team debut. He quickly became a fans' favourite, admired for his frightening turn of pace, quick feet and ferocious strike. In the summer of 2017, by then 21, he was one of a select band of non-league players who were invited for a spell at Jamie Vardie's V9 Academy, and interest was reported from both Sheffield clubs.

Miller's big chance came in the January 2018 transfer window when he moved north of the border to Hamilton Academical in the Scottish Premiership, having already netted 25 times for Carshalton that season. Signing a year-and-a-half contract, his move meant an equivalent of six steps up the football pyramid.

After a successful 2018-19 season, his Accies contract was extended for a further year, and altogether he scored 12 goals in 68 appearances for the club. With his contract up for renewal, Miller chose an offer from Rotherham United, newly promoted to the Championship, but a change in the club's formation meant that chances for him were hard to come by in his first few months. In January 2021 he joined Northampton town on a six-month loan, whilst his parent club were unable to avoid relegation back to League One. However, in his second season, Miller played a key part in the Millers' promotion back to the second tier, and he also started in their EFL Trophy win at Wembley.

Despite playing 30 times in Rotherham's 2021-22 promotion-winning campaign, his two-year contract was not renewed at the end of the season, with some niggling injuries a possible factor. This was good news for Steven Schumacher and his staff, who had been keeping an eye on the 26-year-old winger, and despite interest from other clubs, Miller chose Home Park.

Greens on Screen is run as a service to fellow supporters, in all good faith, without commercial or private gain.  I have no wish to abuse copyright regulations and apologise unreservedly if this occurs. If you own any of the material used on this site, and object to its inclusion, please get in touch using the 'Contact Us' button at the top of each page. Search facility powered by JRank Search Engine. Hover facility courtesy of Milonic. UK time at page load: 13 August 2022, 07:41.