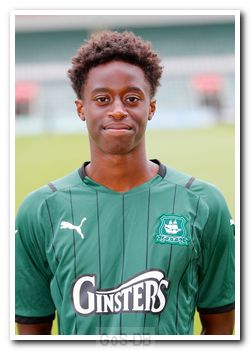 Waruih joined Argyle's academy programme at the age of nine, after attending Plymouth's Advanced Development Centre. As a pupil of St Boniface Catholic College, he was selected for Plymouth schoolboys at under-14 and under-15 levels, and represented the academy in the Super Cup in Northern Ireland in 2018.

In June 2020 Waruih accepted the offer of a two-year scholarship, and a little over a year later the young midfielder made his first-team debut when he took to the field for the first 63 minutes of an EFL Trophy tie at Newport County.

Greens on Screen is run as a service to fellow supporters, in all good faith, without commercial or private gain.  I have no wish to abuse copyright regulations and apologise unreservedly if this occurs. If you own any of the material used on this site, and object to its inclusion, please get in touch using the 'Contact Us' button at the top of each page. Search facility powered by JRank Search Engine. Hover facility courtesy of Milonic. UK time at page load: 27 October 2021, 23:38.