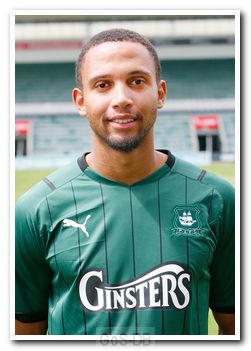 Came from: Luton Town   Went to:

Galloway signed a six-month deal at Home Park in July 2021, having been on trial with the Pilgrims since the final stages of the 2020-21 campaign. The versatile left-sided defender became Ryan Lowe's seventh capture of the summer, following the arrival of Callum Burton, James Bolton, Macaulay Gillesphey, James Wilson, Dan Scarr and Jordan Houghton.

Born on Harare, Zimbabwe, Galloway moved to England with his family at the age of six. He began his footballing career at Milton Keynes Dons, where he became their youngest-ever first team player when he appeared as a 79th minute substitute at the age of 15 in 2011. Three years later, after 16 appearances for the Dons, Galloway signed a five-year deal with Everton, making his Premier League debut at West Ham in May 2015 and his first start at Goodison a week later.

Galloway went on to play 21 times for the Toffees, having also had season-long loan spells with West Bromwich Albion in the Premier League and Sunderland in the Championship, although he was unable to establish a regular place in either side's line-up. It was also during his time on Everton's books that he caught the eye of the national selectors, and went on to represent England at every age level from under-17 to under-21.

The left-sided defender made the switch to Championship side Luton Town in the summer of 2019, but found game-time hard to come by at Kenilworth Road, playing just six times before his release two years later. At the age of 25, he was the fifth new defender to arrive at Home Park in the summer of 2021, bringing Premier League and Championship experience to Ryan Lowe's squad.

Greens on Screen is run as a service to fellow supporters, in all good faith, without commercial or private gain.  I have no wish to abuse copyright regulations and apologise unreservedly if this occurs. If you own any of the material used on this site, and object to its inclusion, please get in touch using the 'Contact Us' button at the top of each page. Search facility powered by JRank Search Engine. Hover facility courtesy of Milonic. UK time at page load: 23 January 2022, 08:54.