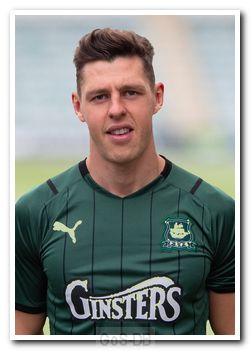 Came from: Portsmouth   Went to:

Bolton became Argyle's fifth new face of the 2021 summer when he signed on the same June day as another town-like name, Callum Burton.

Born in Stone, Staffordshire, Bolton spent seven years as a youth player at nearby Stoke City before joining Conference National League side Macclesfield Town in 2011, at the age of 16. After loan spells at Workington, Stafford Rangers and Halifax Town, the right-sided defender played 10 times for Macclesfield, and then in the final months of his three years at Moss Rose, went on loan to Halifax Town for a second time, where he stayed when a permanent deal was agreed in July 2014.

Bolton went on to play a total of 94 times for Halifax, before joining Gateshead in the summer of 2016 for a further 37 National League appearances.

The Football League came calling a year later, in the form of Shrewsbury Town in League One, for whom Bolton signed a two-year contract in July 2017. He made his EFL debut on the first day of the season and scored his first League goal in January 2018, against Portsmouth, his next club. Bolton played 85 times in his two years at the New Meadow and became a firm favourite with the fans, who were disappointed when he rejected a renewed contract in June 2019 and instead signed a three-year deal with Portsmouth.

Bolton's 53 appearances for Pompey included a dramatic 2-2 draw at home to Argyle in February 2021, when he scored his side's equaliser in the 87th minute. With a year remaining on his contract at Fratton Park, Portsmouth accepted an undisclosed offer for the 26-year-old to allow him to travel west to Home Park on a two-year deal.

Greens on Screen is run as a service to fellow supporters, in all good faith, without commercial or private gain.  I have no wish to abuse copyright regulations and apologise unreservedly if this occurs. If you own any of the material used on this site, and object to its inclusion, please get in touch using the 'Contact Us' button at the top of each page. Search facility powered by JRank Search Engine. Hover facility courtesy of Milonic. UK time at page load: 23 January 2022, 08:53.