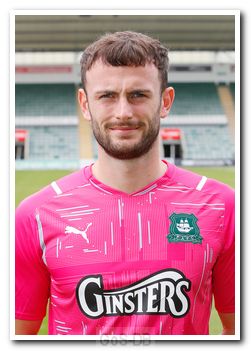 Came from: Cambridge United   Went to:

Burton became Argyle's fourth new face of the 2021 summer when he signed on the same June day as another town-like name, James Bolton.

Born in Newport, Shropshire, the goalkeeper began his playing career in the youth setup at Shrewsbury Town. Having already achieved England under-16 and under-17 international honours, he was sent on a work experience loan to Market Drayton in August 2013, and a month later to Conference North team Workington. In February 2014 he was rewarded with a two-year professional contract at Shrewsbury, having earned a call-up for his country's under-18 side earlier in the season.

Loan spells at Nuneaton (twice), Southport and Telford followed over the following three years, as did his Football League debut and his only senior game for the Shrews, on the last day of the 2015-16 season.

In July 2017, the 6' 2" stopper signed for Hull City, following the Yorkshire club's relegation from the Premier League. He was sent out on loan to Salford City in his first season as a Tiger, and to Chesterfield in the second. Without winning a place in Hull's senior side, he moved to Cambridge United in League Two on a two-year deal in June 2019, making 50 appearances and helping the U's win promotion to League One in his second season at the club.

Despite the important part he played in Cambridge's promotion campaign, the 24-year-old was released in May 2021, freeing him to sign a two-year deal at Home Park on the same day that club hero Luke McCormick, who it was thought had retired, retained his player registration and signed a new deal as a training goalkeeper.

Greens on Screen is run as a service to fellow supporters, in all good faith, without commercial or private gain.  I have no wish to abuse copyright regulations and apologise unreservedly if this occurs. If you own any of the material used on this site, and object to its inclusion, please get in touch using the 'Contact Us' button at the top of each page. Search facility powered by JRank Search Engine. Hover facility courtesy of Milonic. UK time at page load: 23 January 2022, 08:51.