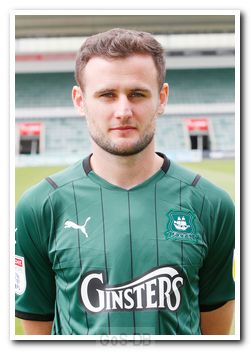 Gillesphey became Ryan Lowe's third new signing of the 2021 close season, and his third new defender when the 25-year-old returned from two years in Australia.

Ashington-born Gillesphey began his career with Cramlington Juniors before progressing through Newcastle United's youth academy to sign a professional contract for the Magpies in March 2015. Six months later he joined Carlisle United on a season-long loan, and his senior debut was one to cherish when he entered the fray as a 73rd minute substitute in a 1-1 League Cup draw with Premier League giants Liverpool at Anfield, the Reds eventually scraping through on penalties.

Gillesphey returned to Brunton Park the following summer for another full-season loan, and then returned to Newcastle for the 2017-18 campaign in which he appeared three times for the Newcastle Under-21 side in the Football League Trophy. After his contract at St James' Park was not renewed in the summer of 2018, he headed back to Carlisle for a third spell, this time on a permanent deal, and went on to add 30 more appearances to an eventual total of 93 games for the Cumbrians.

In August 2019, Gillesphey touched down in Australia to sign for Liverpool legend Robbie Fowler at Brisbane Roar. In his two seasons in Queensland, the left-sided centre-back was a rock at the heart of the Roar's defence and a threat at set pieces, helping his club to a top-four finish in both A-League campaigns and winning the club's Player of the Year award for the coronavirus-impacted 2020-21 season.

Gillesphey's arrival at Home Park in the summer of 2021 was another significant step in the rebuild of the Pilgrims' defence; he was the third centre-back to join in a month, following James Wilson and Dan Scarr.

Greens on Screen is run as a service to fellow supporters, in all good faith, without commercial or private gain.  I have no wish to abuse copyright regulations and apologise unreservedly if this occurs. If you own any of the material used on this site, and object to its inclusion, please get in touch using the 'Contact Us' button at the top of each page. Search facility powered by JRank Search Engine. Hover facility courtesy of Milonic. UK time at page load: 23 January 2022, 08:49.