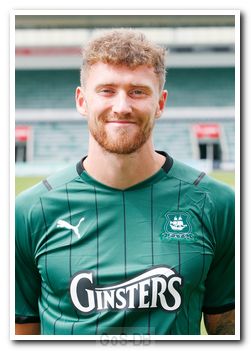 Scarr became the Pilgrims second new face of the 2021 close season when he joined Ryan Lowe's side from Walsall.

The tall, powerful central defender worked his way up to the EFL through impressive performances at non-league level. He started out in Worcester City's youth team whilst at Worcester College of Technology, where he was club captain and selected to play for England colleges. He moved on to Midland Alliance (tier 9) club Causeway United before climbing two steps of the football pyramid to join Redditch United of the Southern League Premier Division in 2014. A year later he joined Northern Premier League club Stourbridge, balancing football with work as a part-time personal trainer.

Scarr was an important part of Stourbridges historic run to the third round of the FA Cup in 2016-17, scoring the equaliser in the clubs eventual 2-1 defeat by Wycombe Wanderers at Adams Park. That season he was named in the Northern Premier League Team of the Season.

Having impressed against full-time opposition, the Bromsgrove-born defender attracted interest from a number of high-profile clubs, including West Bromwich Albion and Middlesbrough, before impressing enough on trial at Birmingham City - his boyhood favourites - to earn a permanent move to the Championship club.

In August 2017 Scarr returned to Adams Park to join Wycombe on a season-long loan, and established himself in the team that secured automatic promotion to the third tier.

In January 2019, having found first team opportunities limited at St Andrews, Scarr joined Walsall on a permanent deal. He netted seven times in 96 appearances in the next two and a half seasons, but the 26-year-old then rejected the offer of a new contract, choosing instead to step up to League One with Ryan Lowe's Pilgrims.

Scarr's arrival at Home Park in June 2021 was the second boost for Argyle's back-line, James Wilson having signed three weeks earlier, and he also met up again with Argyle captain Joe Edwards, with whom he played at Walsall.

Greens on Screen is run as a service to fellow supporters, in all good faith, without commercial or private gain.  I have no wish to abuse copyright regulations and apologise unreservedly if this occurs. If you own any of the material used on this site, and object to its inclusion, please get in touch using the 'Contact Us' button at the top of each page. Search facility powered by JRank Search Engine. Hover facility courtesy of Milonic. UK time at page load: 02 July 2022, 05:35.