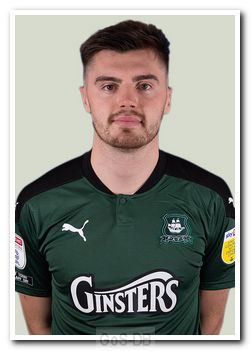 Came from: Crystal Palace   Went to:

Bromley-born Woods joined the Pilgrims at the end of the January 2021 transfer window, on a half-season loan from Crystal Palace.

A product of the Selhurst Park clubs academy, the lifelong Eagles fan captained Palace's under-16 side before breaking into their development squad towards the end of the 2015-16 campaign. After sharing his time between the under-18s and under-23s throughout the following season, the centre-back played a key role in helping his team claim the Professional Development League title in 2017-18.

Woods made his first-team debut in October 2018 as a 79th minute substitute in an EFL Cup fourth-round tie at Middlesbrough, and made his first senior start early in August 2019, at home to Colchester United, again in the EFL Cup. Two months later he signed a contract extension until June 2021.

In January 2020, Woods moved on a half-season loan to Scottish Premiership side Hamilton Academical, where he scored on his debut, but his time in South Lanarkshire was cut short when the season was halted by the COVID-19 pandemic.

After regular appearances for Palaces under-23 side in the first half of the 2020-21 season, operating at centre-back, right-back or defensive midfield, the 22-year-old arrived at Home Park to bolster Ryan Lowe's defensive options.

Greens on Screen is run as a service to fellow supporters, in all good faith, without commercial or private gain.  I have no wish to abuse copyright regulations and apologise unreservedly if this occurs. If you own any of the material used on this site, and object to its inclusion, please get in touch using the 'Contact Us' button at the top of each page. Search facility powered by JRank Search Engine. Hover facility courtesy of Milonic. UK time at page load: 07 May 2021, 13:46.