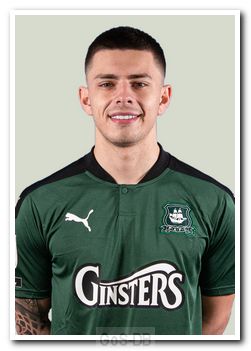 Came from: Liverpool   Went to:

Lewis became the Pilgrims first signing of the January 2021 transfer window when he joined on loan from Liverpool until the end of the season.

Born in Liverpool, the 21-year-old wing-back joined the Reds as an under-6 and then progressed through the age groups to captain the under-18 side under Steven Gerrard, who praised him as one of the best he had seen at that level.

As he developed as a teenager, Lewis also progressed through England's age groups, including appearances for the under-19 team at the 2018 European Championship in Finland. That September he made his debut for the England's under-20s.

Lewis became a regular member of Liverpool's under-23 side in the 2018-19 campaign, and also spent time at the club's training centre with Jurgen Klopps first-team squad. Knee ligament damage forced him to spend four months of the following season on the sidelines, but he recovered to make his senior debut in the FA Cup fourth round replay against Shrewsbury Town in February 2020.

That summer he was rewarded with a long-term contract with the Premier League champions, and then joined French second-tier side Amiens SC on loan for the 2020-21 campaign. However, he was not selected as often as had been hoped and was recalled by his club. Just days after his return to England, Lewis was welcomed by fellow Liverpudlians Ryan Lowe and Steven Schumacher at Home Park.

Greens on Screen is run as a service to fellow supporters, in all good faith, without commercial or private gain.  I have no wish to abuse copyright regulations and apologise unreservedly if this occurs. If you own any of the material used on this site, and object to its inclusion, please get in touch using the 'Contact Us' button at the top of each page. Search facility powered by JRank Search Engine. Hover facility courtesy of Milonic. UK time at page load: 07 May 2021, 13:25.