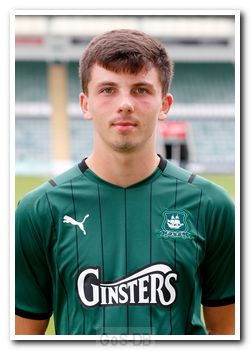 Born in Liverpool, Mitchell had spells at a very young age at Liverpool, Blackburn Rovers and Wigan Athletic, but was generally considered too small for his age. He joined the Tranmere Rovers Centre of Development at the age of 15 and blossomed under their care, and he had grown too. By the time Argyle came calling, he was 6ft 4in tall.

In August 2020 Mitchell made his debut for Warrington Town in the Northern Premier League Premier Division (tier 7), but with EFL clubs in the North West interested in him, the 17-year-old decided to make the long journey to Plymouth, attracted by his fellow Liverpudlian, Ryan Lowe. He signed full-time apprentice forms in September 2020 and immediately established his place in the under-18 team's defence. Just two months later he was given his first chance in the senior side, appearing as an 80th minute substitute in an EFL Trophy win over Newport County at Home Park.

Greens on Screen is run as a service to fellow supporters, in all good faith, without commercial or private gain.  I have no wish to abuse copyright regulations and apologise unreservedly if this occurs. If you own any of the material used on this site, and object to its inclusion, please get in touch using the 'Contact Us' button at the top of each page. Search facility powered by JRank Search Engine. Hover facility courtesy of Milonic. UK time at page load: 26 October 2021, 15:07.