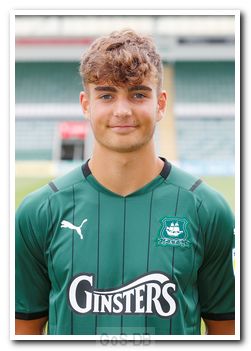 Craske began his Home Park journey at the age of ten, after progressing from the Bodmin Advanced Development Centre. Already making his way through the Pilgrim's youth system was his older brother, Billy, who left Home Park in August 2018 as an academy graduate but without reaching the senior side.

Originally from Wadebridge, Finley attended Ivybridge Community College and played for Plymouth Schoolboys at under-14 and under-15 levels. He was described as an energetic right-back who was also comfortable playing as a more advanced wing-back.

After an injury-hit season, the 16-year-old was relieved in June 2019 to sign a full-time apprenticeship at the club. His first senior appearance came as a 76th minute substitute in an EFL Trophy match at home to Newport County in November 2020. Three apprentices made their debuts that night, one of whom was Craske's Ivybridge schoolmate, Scott Crocker. On the final day of the season, Craske made his full Football League debut as an 88th minute substitute at Gillingham.

In May 2021, after the considerable disruption caused by the COVID-19 pandemic, Craske's two-year apprenticeship was extended for a further year.

Greens on Screen is run as a service to fellow supporters, in all good faith, without commercial or private gain.  I have no wish to abuse copyright regulations and apologise unreservedly if this occurs. If you own any of the material used on this site, and object to its inclusion, please get in touch using the 'Contact Us' button at the top of each page. Search facility powered by JRank Search Engine. Hover facility courtesy of Milonic. UK time at page load: 27 October 2021, 13:11.