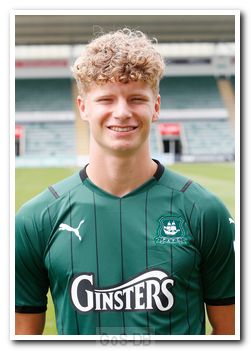 From St Stephen-in-Brannel, near St Austell, Pursall attended Brannel School and represented East Cornwall Schoolboys in the under-14 and 15 age groups. Having progressed through the Cornwall player pathway, he signed for Argyle's academy as an under-nine, and his encouraging development as a left-sided defender was rewarded when he was invited to join the England under-15 training camp in Loughborough for four days in August 2018.

Pursall played for the Pilgrims' under-18 side during the 2019-20 campaign, and at the end of the season was selected for a two-year apprenticeship at Home Park. His senior debut came in early September 2020, as a 76th minute substitute in the EFL Trophy defeat by Norwich City at Home Park, thus becoming, at 16 years and 176 days, the third youngest first team player in the club's history.

Greens on Screen is run as a service to fellow supporters, in all good faith, without commercial or private gain.  I have no wish to abuse copyright regulations and apologise unreservedly if this occurs. If you own any of the material used on this site, and object to its inclusion, please get in touch using the 'Contact Us' button at the top of each page. Search facility powered by JRank Search Engine. Hover facility courtesy of Milonic. UK time at page load: 26 October 2021, 14:56.