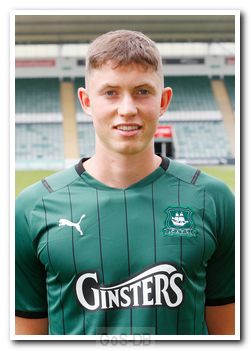 Tomlinson attended Ivybridge Community College and began his grassroots football with Ivybridge Town and Marine Academy in Plymouth, and also played for Plymouth Schools at under-11, 14 and 15 levels. He joined Argyle's academy as an under-13, and having progressed through the youth system, made his under-18 debut in 2016, whilst still an under-15. In the summer of 2018, the 16-year-old central defender began a two-year apprenticeship at the club, making appearances in the Pilgrims Central League and Premier League Cup campaigns.

Tomlinson signed his first professional contract in the summer of 2020, aged 18, having impressed Ryan Lowe and his coaching staff at Home Park. In early September he made his first team debut, playing the full 90 minutes in an EFL Trophy defeat by Norwich City at Home Park, and a few days later joined Southern League Division One South side Barnstaple Town on a one-month youth loan.

Greens on Screen is run as a service to fellow supporters, in all good faith, without commercial or private gain.  I have no wish to abuse copyright regulations and apologise unreservedly if this occurs. If you own any of the material used on this site, and object to its inclusion, please get in touch using the 'Contact Us' button at the top of each page. Search facility powered by JRank Search Engine. Hover facility courtesy of Milonic. UK time at page load: 23 January 2022, 08:18.