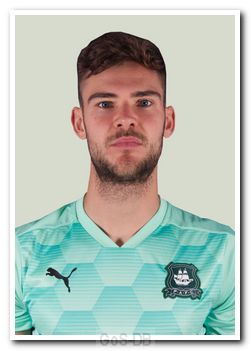 Came from: Leganés B, Spain   Went to: Released

Ruddy joined the Pilgrims in the first week of the 2020-21 season, to provide goalkeeping cover for Mike Cooper after the returning Luke McCormick suffered a shoulder injury in training.

Born in Glasgow, Ruddy began his football career with Rangers, joining their academy at the age of seven. Five years later his family relocated to southern Spain, where he joined the Real Murcia youth set-up. Having reached the age to turn professional, he went on trial with La Liga side Villarreal, but found that he was unable to sign senior terms with any club until he was 21 because of a change in Spanish regulations for foreign players.

As a result, the Scotland youth international returned to the UK in the summer of 2014 to sign his first professional deal, at Bury, joining up with Ryan Lowe, who was a player at Gigg Lane at the time. Another future Home Park connection came in November 2015 when he made his only first team appearance for the Shakers, lining up with Danny Mayor.

Ruddy's potential was spotted by Wolverhampton Wanderers, and in August 2016 he joined the Championship side on an initial two-year deal. After making his debut for Scotland's under-21s in March 2017, he was loaned to Oldham Athletic for the first half of the 2017-18 campaign, followed immediately by a loan to Ayr United until the end of the season.

Ruddy returned to familiar surroundings when he was one of nine young Wanderers to be sent on loan to FC Jumilla in the Spanish third tier in August 2018. Later that season he remained in Spain for a short spell with SS Reyes, before being released by Wolves in the summer of 2019.

Swapping the temperatures of southern Spain for northern Scotland, Ruddy signed a 12-month contract for Ross County in July 2019, but seven months later he left Victoria Park for CD Leganes B on the outskirts of Madrid for the remainder of the 2019-20 season.

After a late spell of pre-season training at Home Park, the 22-year-old became Ryan Lowe's ninth signing of 2020's extended summer transfer window, and later that day he made his Argyle debut in an EFL Trophy match at Home Park.

Greens on Screen is run as a service to fellow supporters, in all good faith, without commercial or private gain.  I have no wish to abuse copyright regulations and apologise unreservedly if this occurs. If you own any of the material used on this site, and object to its inclusion, please get in touch using the 'Contact Us' button at the top of each page. Search facility powered by JRank Search Engine. Hover facility courtesy of Milonic. UK time at page load: 16 May 2021, 02:44.