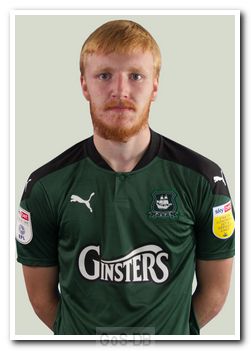 Wilson went to school at Penrice Academy in St Austell and played for Argyle's under-8 to under-14 teams. Although he was released at that stage, he returned on trial and impressed in 2016 with four goals at SuperCupNI, a leading international youth tournament in Northern Ireland. Very much back in the fold, he was awarded a two-year apprenticeship in 2018 and signed his first professional contract in June 2020.

Described by manager Ryan Lowe as "a handful, an old-fashioned centre-forward, a goalscorer first and foremost", Wilson was given his first team debut on his 18th birthday, as a 78th minute substitute at Swindon Town in the Football League Trophy in October 2019. He went on to play regularly in the Premier League Cup and the Central League, and in March 2020 was set to join Plymouth Parkway on work experience before football was halted by the COVID-19 pandemic.

Greens on Screen is run as a service to fellow supporters, in all good faith, without commercial or private gain.  I have no wish to abuse copyright regulations and apologise unreservedly if this occurs. If you own any of the material used on this site, and object to its inclusion, please get in touch using the 'Contact Us' button at the top of each page. Search facility powered by JRank Search Engine. Hover facility courtesy of Milonic. UK time at page load: 07 May 2021, 14:45.