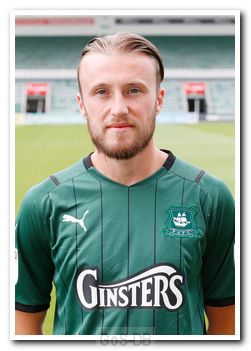 Cooper's loan season at Home Park was sadly cut short by the COVID-19 pandemic, but his performances on the left side of midfield were one of the stand-out features of the promotion-winning campaign. Having impressed with his telling crosses and 12 assists, his March departure after the final game of the season (when he scored twice) was a sad moment for the Home Park faithful. In early September 2020, three days before the start of the new campaign and after prolonged negotiations with Peterborough, the very welcome news came that the 23-year-old had signed a three-year contract for an undisclosed fee, becoming Ryan Lowe's seventh signing of the summer.

Greens on Screen is run as a service to fellow supporters, in all good faith, without commercial or private gain.  I have no wish to abuse copyright regulations and apologise unreservedly if this occurs. If you own any of the material used on this site, and object to its inclusion, please get in touch using the 'Contact Us' button at the top of each page. Search facility powered by JRank Search Engine. Hover facility courtesy of Milonic. UK time at page load: 02 July 2022, 06:35.