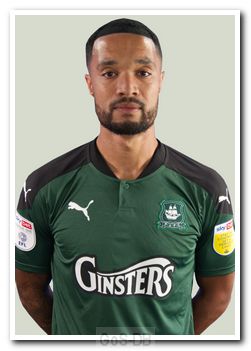 Came from: Bury   Went to: Released

Moore was one of five League Two promotion-winning Bury players to follow manager Ryan Lowe to Home Park in the summer of 2019, alongside Will Aimson, Danny Mayor, Callum McFadzean and Dom Telford.

The Stoke-on-Trent-born forward joined up with the Pilgrims in their summer 2019 training camp in Alicante and completed his move to Home Park upon the squads return to England.

Moore began his football career at Crewe Alexandra's academy, making his debut for the club as an 18-year-old in 2008. He notched up nearly 300 appearances and 33 goals in his seven seasons at Gresty Road and was twice a Wembley winner, scoring in the 2012 League Two Play-off Final and playing in the following seasons Johnstones Paint Trophy. Amongst his teammates in his time at Crewe were his future Argyle manager and his assistant, Steven Schumacher, and future Pilgrim teammates Antoni Sarcevic and Joel Grant.

After Crewe he continued to play in League One, first with Port Vale for two seasons (59 games, 6 goals) and then two years with Bristol Rovers (56 games, 2 goals). Then in the summer of 2018, Lowe and Schumacher, the new management team at Bury, signed him on at Gigg Lane, where he added another promotion to his CV.

Moore arrived at Home Park a month before his 31st birthday but his energetic performances soon made him a fans' favourite, and his ability to play up-front or as a wing-back, often swapping during a game, gave the manager very useful options.

Greens on Screen is run as a service to fellow supporters, in all good faith, without commercial or private gain.  I have no wish to abuse copyright regulations and apologise unreservedly if this occurs. If you own any of the material used on this site, and object to its inclusion, please get in touch using the 'Contact Us' button at the top of each page. Search facility powered by JRank Search Engine. Hover facility courtesy of Milonic. UK time at page load: 16 May 2021, 04:23.