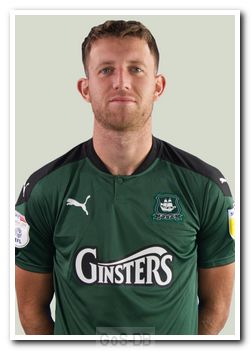 Aimson followed Argyle manager Ryan Lowe from Gigg Lane to Home Park in the summer of 2019, having made 43 appearances under Lowe at Bury in the 2018-19 season, when the Shakers won promotion to League One.

The Hampshire-born central defender had previously played for Tamworth and Tranmere Rovers on loan from Hull City, who had picked him up as a teenager from non-league Eastleigh.

Aimson's promising start at Tranmere was brought to a sudden end in November 2014 when he collided with a team-mate, breaking both tibia and fibula bones.

After successfully recovering from his career-threatening injury, Aimson joined Blackpool on loan a year later, a move that was eventually made permanent. After 69 appearances whilst at Bloomfield Road, Aimson joined Bury in July 2018, where, along with four other members of the 2019-20 Argyle squad, he won promotion to English football's third tier.

When signing at Home Park, Lowe described Aimson as much sought-after and a Championship-standard player. However, he arrived with a pelvic injury that curtailed his involvement in pre-season preparation and meant he missed the opening games of the 2019-20 campaign.

Greens on Screen is run as a service to fellow supporters, in all good faith, without commercial or private gain.  I have no wish to abuse copyright regulations and apologise unreservedly if this occurs. If you own any of the material used on this site, and object to its inclusion, please get in touch using the 'Contact Us' button at the top of each page. Search facility powered by JRank Search Engine. Hover facility courtesy of Milonic. UK time at page load: 07 May 2021, 13:30.