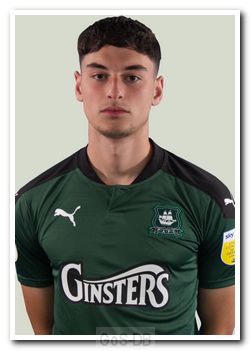 Born in Greece, Lolos started his football journey at Olympiakos at the age of nine. Moving to the United Kingdom, he attended school in Barnet and then had trials at Liverpool, Norwich, and Reading before choosing a two-year academy contract with Crystal Palace, until he was 16.

After leaving Palace he had a trial at Birmingham City, where he was spotted by Kevin Hodges and Chris Harrison whilst playing in an under-18 friendly against Argyle. He was invited for a trial at Home Park during the 2017-18 pre-season, and after impressing the coaches, earned himself an apprenticeship, which he signed in September 2017.

In 2017-18 the young striker played a significant part in the club's successful FA Youth Cup run, and also had exposure to mens football in the Peninsula League. In May 2018, still only 16, Lolos was named as a substitute for the first team's last game of the season.

In July 2019 he signed his first professional contract at Home Park and featured significantly in Argyle's pre-season games under new manager Ryan Lowe. He was named on the bench for the first match of the season and made his Football League debut as an 84th minute substitute a fornight later, with his first start coming in early September.

Greens on Screen is run as a service to fellow supporters, in all good faith, without commercial or private gain.  I have no wish to abuse copyright regulations and apologise unreservedly if this occurs. If you own any of the material used on this site, and object to its inclusion, please get in touch using the 'Contact Us' button at the top of each page. Search facility powered by JRank Search Engine. Hover facility courtesy of Milonic. UK time at page load: 07 May 2021, 14:48.