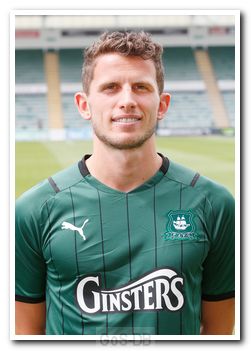 1. Came from: Chelsea   Went to: Chelsea

He had been with the Premier League club since he was seven and made his debut for former Argyle trialist Adrian Viveashs Chelsea youth team as an under-15 in January 2011. By 2013-14 he featured as a defensive midfielder in the club's FA Youth Cup run, scoring a crucial goal in the final against Fulham at Stamford Bridge to help the club win the tournament. He was then made captain of the under-21 side for the following season, while still a teenager, and signed a four-year professional contract in the summer of 2013.

Originally from Chertsey in Surrey, Houghton signed a loan deal with Argyle until the end of May. The 20-year-old came with previous experience of Home Park, having played for Gillingham in August 2015 while on a half-season loan at the Kent club. In his long journey through the Chelsea development sides, he was also capped by England at under-16, 17 and 20 levels.

Houghton made 10 appearances for Argyle in his loan spell and scored his only goal in a 20 victory at Morecambe. He returned to Chelsea and was then loaned to League Two rivals Doncaster Rovers for the 2016-17 season, where he made 36 appearances in Rovers' promotion season before his stay was cut short by a knee injury. However, in August 2017 he returned to the Keepmoat for another loan season and added 40 to his Donny total.

Returning to Stamford Bridge, he was released by Chelsea in the summer of 2018, without playing for the senior side. Newly relegated MK Dons stepped in with a two-year deal, and Houghton helped them back to League One at the first attempt. His contract was extended for a further year in 2020, and in his three seasons at Stadium MK he notched up 107 appearances.

Greens on Screen is run as a service to fellow supporters, in all good faith, without commercial or private gain.  I have no wish to abuse copyright regulations and apologise unreservedly if this occurs. If you own any of the material used on this site, and object to its inclusion, please get in touch using the 'Contact Us' button at the top of each page. Search facility powered by JRank Search Engine. Hover facility courtesy of Milonic. UK time at page load: 23 January 2022, 10:07.