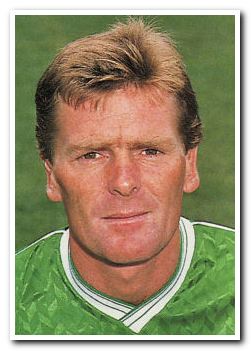 Plymouth-born but Saltash-based, Brimacombe's route to professional football is rare in the modern game; Argyle plucked Brimacombe from a day job in Devonport Dockyard to a Football League debut at the age of 27.

He had been a stalwart of the local non-league scene for many years, playing for Saltash United whilst working in the 'yard'. His Football League debut against York City was one to remember: he scored a memorable 'corker' in a 2-2 draw in January 1986, although it turned out to be his only game that season.

Brimacombe enjoyed his best spell after succeeding Gordon Nisbet as the club's first-choice right-back, and in the 1987-88 campaign he was a near ever-present. However, the emergence of Kenny Brown the following season saw him move to midfield, where his appearances became more sporadic. In total he spent four years at Home Park, playing under three managers, and after injury was released in 1990 to return to part-time football.

Greens on Screen is run as a service to fellow supporters, in all good faith, without commercial or private gain.  I have no wish to abuse copyright regulations and apologise unreservedly if this occurs. If you own any of the material used on this site, and object to its inclusion, please get in touch using the 'Contact Us' button at the top of each page. Search facility powered by JRank Search Engine. Hover facility courtesy of Milonic. UK time at page load: 09 December 2021, 06:33.