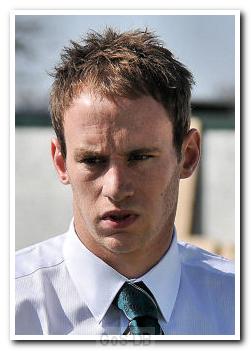 Gray twice joined Argyle on loan from Manchester United. Born in Edinburgh, he started his career with Heart of Midlothian before moving to Old Trafford at the age of 16. Originally signed as a winger, he broke into the United reserve team at right-back, the position he played at Home Park, making his debut in a League Cup tie in October 2006. He had a loan spell with United feeder club Royal Antwerp in January 2007 but had to return after just one appearance due to injury. Another loan, to Crewe Alexandra, followed later that year and, with no chance of breaking into the first team at Old Trafford, he joined Argyle for the second half of the 2008-09 season. A consistent, steady performer, he returned on a three-month loan at the start of the following campaign.

After his second loan spell at Home Park, Gray returned to Manchester and was offered a one-year extension to his Old Trafford contract at the end of the 2009-10 season. However, he declined in favour of a move to Preston North End on a two-year deal in July 2010. In his time at Deepdale he made 52 appearances across two seasons but broke his leg whilst with the club and was released at the end of his contract. Moving south, Gray then joined Stevenage, playing 58 times for the Hertfordshire side. Transfer listed by the incoming Graham Westley at Broadhall Way, Gray moved to Burton Albion on a short-term contract, playing 14 times in the second half of the 2013-14 season before returning to Scotland's capital to sign for Hibernian, where he became a regular choice and scored the first goal of his senior career.

In that debut season, Gray contributed offensively, scoring three goals, including a header at Ibrox and a strike from the edge of the box in Hibernian's 4-0 win over Rangers in December 2014. Gray became club captain in 2015. He was a stand-out performer in the 2015-16 season and enshrined his name in Hibernian history with an excellent performance in the Scottish Cup Final in which his drive and determination to bring the trophy back to Leith was evident. Fittingly, his header in the second minute of injury-time won the match against Rangers 3-2, ending the 114-year wait to take the trophy back to Leith. The right-back's consistent performances continued and as a result has retained the captaincy and signed a two-year contract extension in the summer of 2017.

Greens on Screen is run as a service to fellow supporters, in all good faith, without commercial or private gain.  I have no wish to abuse copyright regulations and apologise unreservedly if this occurs. If you own any of the material used on this site, and object to its inclusion, please get in touch using the 'Contact Us' button at the top of each page. Search facility powered by JRank Search Engine. Hover facility courtesy of Milonic. UK time at page load: 16 May 2021, 03:40.