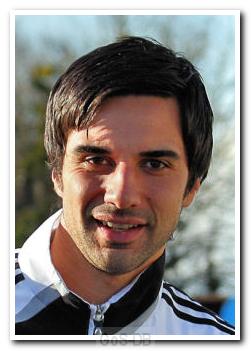 Fallon joined Argyle from Swansea City for a then club record-equalling fee of £300,000. Born in New Zealand, he started his career with North Shore United before moving to England with Barnsley, progressing through their youth system. He had a brief spell on loan at Shrewsbury Town before joining Swindon Town in November 2003. After spending a month on loan at Yeovil Town he soon became a favourite at Swindon, and his goalscoring record there led to a move to Swansea.

The tall, powerful striker had a frustrating start at Argyle and nearly left to join Southend United, but turned down the move and fought his way into the first team reckoning. Over his first three seasons at Home Park, Fallon became a regular first teamer but made almost as many appearances from the bench as starts. Despite playing for England at youth level, a FIFA rule change allowed him to represent New Zealand and he scored the goal that sent his country to the 2010 World Cup Finals.

Fallon started all three of New Zealand's games in South Africa, where they were knocked out at the group stage despite remaining unbeaten. He battled niggling injuries throughout the following season, his last with the club. In late 2010 he was loaned to Championship side Ipswich Town, playing six times and scored once, but after returning to Home Park in January 2011, he continued to be in and out of the side before being released at the end of the 2010-11 campaign.

Following a short pre-season trial, Fallon signed for Yeovil Town on an initial one-month contract in August 2011. Despite making five appearances, he was released at the end of the contract, and by mid-September, had signed a two-year deal with Scottish Premier League side Aberdeen, joining a club that has seen many ex-Pilgrims on its books, including Chris Clark, Yoanne Folly, Kari Arnason, Jim Paterson, Steve MacLean and David McNamee. Although he didn't find the net in his first ten appearances, his goal against Hibernian in Aberdeen's Scottish Cup semi-final defeat won the Scottish PFA Goal of the Season Award.

After nine goals in 45 games for Aberdeen, Fallon left at the end of his contract to sign a year-long deal at St Johnstone in July 2013. However, six months later he was allowed to leave, having clocked up a single goal in 12 games for the Saints, including two in the Europa League, although he only featured once in the starting line-up.

In February 2014, Fallon joined Crawley Town until the end of the season, where he made eight appearances without scoring. In the following September he signed a short-term contract at Scunthorpe United, but after a promising three goals in his first five appearances for the Iron, a cruciate ligament injury kept him on the sidelines and his deal was not extended at the end of the season. He remained without a club until January 2016, when he joined Bristol Rovers on non-contract terms until the end of that season.

After three appearances for Rovers he then teamed up with Lee Hodges' Truro City as a player-coach. After 12 appearances his contract was cancelled by mutual consent in December 2016. In the summer of 2017 he appeared for Torquay United against Argyle in a pre-season game at Plainmoor, whilst on trial, and this led to him signing on non-contract terms for the Gulls' forthcoming National League season.

Greens on Screen is run as a service to fellow supporters, in all good faith, without commercial or private gain.  I have no wish to abuse copyright regulations and apologise unreservedly if this occurs. If you own any of the material used on this site, and object to its inclusion, please get in touch using the 'Contact Us' button at the top of each page. Search facility powered by JRank Search Engine. Hover facility courtesy of Milonic. UK time at page load: 04 July 2022, 09:08.