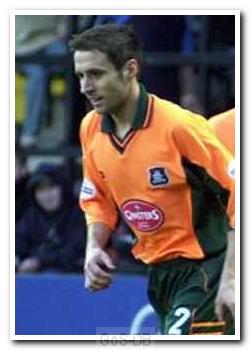 Beginning his career in his native Ireland where he played for Rush Athletic, Home Farm and Shelbourne, Worrell moved to Blackburn Rovers in 1995. He spent four years at Ewood Park but did not make the first team before being signed by Paul Sturrock for Dundee United (18 appearances). Eighteen months after he moved to Tannadice he re-joined Sturrock when he became one of the new Argyle manager's first signings at Home Park, initially on a two-month loan.

Worrell became Argyle's first choice right-back for the next four years, only losing his place due to injury (a heroic broken ankle from a successful goal-line clearance at Barnet's Underhill, which buckled the ankle he blocked the ball with) and eventually he shared the position with Paul Connolly. He had, however, been an integral, popular and often unsung part of Paul Sturrock's two title-winning sides, picking up championship medals for the Third Division (200102) and then Second Division (200304).

After his release by Argyle he amassed 90 appearances in two years at Rotherham United, before returning to Scotland with Dundee (27 appearances). Twelve months later he joined Montrose, where he played 15 times in a single season, having decided to combine part-time football with another career. He was released by Montrose at the end of that season and worked as a financial consultant for a company set up to offer financial advice to professional footballers, before returning to Dublin to work in the financial services industry.

In his younger days, Worrell had been part of the Republic of Ireland side that had finished third in the 1997 FIFA World Youth Championship, featuring in all six matches, and was also capped 18 times by their under-21 side, for whom he was captain. He played once for the Republic of Ireland 'B' team, in February 1998, alongside future internationals such as Damien Duff, Richard Dunne and Robbie Keane.

Greens on Screen is run as a service to fellow supporters, in all good faith, without commercial or private gain.  I have no wish to abuse copyright regulations and apologise unreservedly if this occurs. If you own any of the material used on this site, and object to its inclusion, please get in touch using the 'Contact Us' button at the top of each page. Search facility powered by JRank Search Engine. Hover facility courtesy of Milonic. UK time at page load: 04 December 2021, 05:09.