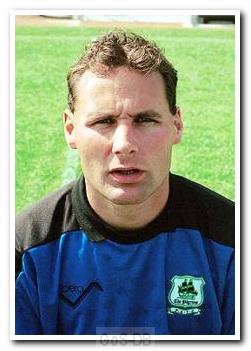 Wilmot became a Pilgrim in February 1989 when he signed from Arsenal for £100,000. Steve Cherry had left Home Park for Notts County a month earlier, and Alan Miller had temporarily filled the breach between the Argyle posts on loan from Arsenal. But when the excellent Miller's loan spell came to an end, the Gunners refused to extend it and instead offered Argyle the permanent services of 27-year-old Wilmot. Manager Ken Brown jumped at the chance, and the dependable Welshman repaid every penny of his transfer fee by making 147 appearances over the next three years and proving a consistently reliable figure in goal. Unusually for a goalkeeper, Wilmot took place kicks with one foot and drop kicks with the other. Clearly having half-decent feet, he once scored a hat-trick for the club in a 13-0 win at Porthleven in the pre-season for 1989-90 when he was put up front as the score escalated.

Settled in Devon and aiming for the club captaincy, Wilmot's Home Park future was blown out of the water when the club announced the managerial appointment of player-manager Peter Shilton in March 1992. Wilmot did make a handful of appearances under Shilton, but the former England keeper was keen to don the gloves himself and thus the 30-year-old Wilmot was allowed to join Grimsby Town at the end of the 91-92 season. With the two clubs failing to agree a fee, the transfer went to a tribunal and Argyle were stung when Wilmot was valued at just £87,500 - more than £200,000 less than Argyle were asking.

Perhaps unsettled by the sudden change in his circumstances, Wilmot's spell with the Mariners was not a happy one, and he made just 33 appearances before signing for Crystal Palace. After six Premier League appearances for the Eagles, Wilmot returned to Devon with Torquay United.

Once his playing career had ended, he moved back to Plymouth to join Devon & Cornwall Police as a Response Officer. Wilmot also spent time back at Home Park as a coach for Argyle's youth academy before he was asked to step up to first team duties by manager John Sheridan in the summer of 2013, combining the role of part-time goalkeeping coach (overseeing Luke McCormick and Jake Cole) with his policing duties. This continued into the following campaign (coaching McCormick and James Bittner) but in June 2015, shortly after the appointment of new manager Derek Adams, Wilmot was released from first team duties (at the same time as coach Sean McCarthy, performance coach John Harbin and chief scout Darren Sheridan), whilst continuing his work at the Pilgrims' youth academy.

Wilmot resumed his first team duties in the summer of 2018, following the departure of James Bittner, and returned to the academy staff when Darren Behcet was appointed to the senior role in September 2020.

Greens on Screen is run as a service to fellow supporters, in all good faith, without commercial or private gain.  I have no wish to abuse copyright regulations and apologise unreservedly if this occurs. If you own any of the material used on this site, and object to its inclusion, please get in touch using the 'Contact Us' button at the top of each page. Search facility powered by JRank Search Engine. Hover facility courtesy of Milonic. UK time at page load: 01 August 2021, 23:34.