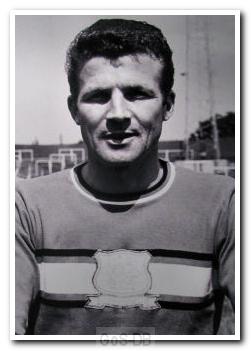 Born in Bristol, Johnny Williams came to live in Plymouth at an early age and learned his football locally, but he did not come through the traditional schoolboy and representative route; in 1954 he was signed as a part-time professional after his father asked the club to give his son a trial. Few could possibly have realised then that the 19-year-old would go on to be one of the most successful players in Argyle's history.

Originally an inside forward, Williams made his debut against Blackburn in September 1955 and retained his place for much of that season. After relegation the side made an appalling start to the 56-57 campaign. Manager Jack Rowley left Williams out and decided to play him at wing-half in the reserve side. Williams returned 4 games later and never looked back. Over the next 6 seasons he missed only 3 games, a tribute to his remarkable fitness and physical strength. At the height of his form he was majestic and constantly watched by top First Division teams. In 1958 he attracted a substantial bid from Wolves, at that time on their way to a second consecutive League Championship.

During National Service in 1958 and 1959 he was a regular in the British Army XI and was often the only non-international in that side. In one Army fixture in Scotland the watching Matt Busby described him as the finest player on view tonight. All of his contemporaries at Home Park shared the opinion that not only could he have played at the highest level but that he would have taken it by storm. In all competitions he made 447 (plus 1 sub) appearances for the Pilgrims and notched 55 goals, many of them unstoppable long-distance drives and volleys. He is 4th in overall appearances for the club.

Williams used his money wisely and at one time owned three separate garages in Efford, West Park and Southway. In 1965 he fell out of favour with Derek Ufton and moved back to his birthplace to play for Bristol Rovers. After 69 appearances and 10 goals the Bristol club reneged on the deal that allowed him to live and train in Plymouth. He became player-manager of Bodmin Town before joining Falmouth Town, whom he helped to unprecedented success. He returned to Argyle to assist Billy Bingham but when the latter was sacked Williams left too and concentrated on his burgeoning garage business.

I can remember as a callow youth of 15 standing by the railings in front of the bank of railway sleepers in what some supporters called Spion Kop, watching my hero Johnny Williams take the field in the FA Cup 3rd Round against West Ham in January 1962. The Hammers were crammed with past, present and future internationals. Bobby Moore, Geoff Hurst and Phil Woosnam were all playing. Argyle put on one of the finest displays I can remember, and stuffed them 3-0. I can remember John Bond losing his temper just in front of me. ...  More

I can remember as a callow youth of 15 standing by the railings in front of the bank of railway sleepers in what some supporters called Spion Kop, watching my hero Johnny Williams take the field in the FA Cup 3rd Round against West Ham in January 1962. The Hammers were crammed with past, present and future internationals. Bobby Moore, Geoff Hurst and Phil Woosnam were all playing. Argyle put on one of the finest displays I can remember, and stuffed them 3-0. I can remember John Bond losing his temper just in front of me.

The highlight of the afternoon was a trademark 30-yard thunderbolt from Johnny Williams - the West Ham goalkeeper Lawrie Leslie did not sniff it.

A wonderful few weeks of memories - I had watched Jimmy Greaves making his debut after his return from Italy for Spurs reserves at Home Park. Unfortunately I missed his appearance on his next visit in the next round of the Cup, when Argyle were on the wrong end of a 5-1 beating.

Just following John Beresford's comments from Nov 15, I was also at the West Ham game as a 10 year old in the Devonport End. Johnny W hit another 30 yard screamer, this time over the bar into the Devonport End. Instinctively I put my hand up to stop the ball, as you do, only to see my watch disappear into pieces!

I used to mentioned this to Johnny W on numerous occasions when calling on him when he owned the 3 garages to sell him Cigarettes and Confectionery.

Johnny came to Rovers when I moved to Bristol. I was a youth, so as Eastville was my closest ground, I remember him more because of the Argyle connection. A brilliant player. Didn't know of the reason for his departure. Firm favourite, along with Harold Jarman. Spectacular goals and a very sporting character. Thanks for the memory, GoS

Greens on Screen is run as a service to fellow supporters, in all good faith, without commercial or private gain.  I have no wish to abuse copyright regulations and apologise unreservedly if this occurs. If you own any of the material used on this site, and object to its inclusion, please get in touch using the 'Contact Us' button at the top of each page. Search facility powered by JRank Search Engine. Hover facility courtesy of Milonic. UK time at page load: 08 December 2021, 15:50.