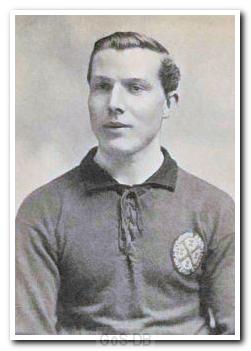 1. Came from: Army   Went to: Career interrupted by WW1

Bowler was born in Southwell, Nottinghamshire, in 1891. He was playing for Army Cup winners Sherwood Foresters when he was spotted by Bob Jack and, after obtaining his discharge from the Army, signed for Argyle in December 1911. He soon blossomed into a top class inside-left, who could also play at centre-forward when required. During the 1912-13 campaign he scored 18 times in 36 games, making a major contribution to the team that won the Southern League title.

Bowler played five times for the Southern League representative side, including an international trial fixture against the Football League in 1913, and also for England in an unofficial international against Scotland in Cairo during World War One. He was renowned for his fantastic ball skills and the Argyle handbook of 1913-14 describes him as "Strong, clever, fast and dashing. He inspires the forward line with his keenness, and his shooting and headwork are invaluable." He played for Argyle for eight seasons either side of the First World War, during which he served in the Far East, before retiring in 1923.

Greens on Screen is run as a service to fellow supporters, in all good faith, without commercial or private gain.  I have no wish to abuse copyright regulations and apologise unreservedly if this occurs. If you own any of the material used on this site, and object to its inclusion, please get in touch using the 'Contact Us' button at the top of each page. Search facility powered by JRank Search Engine. Hover facility courtesy of Milonic. UK time at page load: 08 December 2021, 16:12.