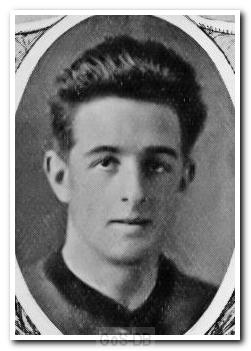 Note: Some sources say his first name was Bruce, but the Western Morning News on 12 May 1924, reporting his arrival, said he was Robert. The 1924-25 PAFC handbook also said he was R. Wallace on one page and B. Wallace on another, which supports the strong evidence that he was Robert (Bob).

Record books often show Wallace's birthplace as Kilmarnock, but there is good evidence that he was a native of Glenbuck, a coal mining village in East Ayrshire - a village that later became famous as the birthplace of Bill Shankly. Wallace spent his youth as a left-winger with Muirkirk Juniors, three miles from Glenbuck, before signing for Hamilton Academical at the age of 18, who beat off competition from other Scottish League sides.

Known there as Bertie, he disappointed in the four appearances he made for the Accies (two apiece in the Scottish League and Lanarkshire Cup), and despite scoring on debut against Hamilton Garrison in the cup, he moved on, joining Bathgate in October 1923 on loan.

In May 1924, Argyle manager Bob Jack brought Wallace south to join two other ex-Accies, Fred Craig and Paddy Corcoran, at Home Park. If it was a big step for the young Scot to leave his familiar surroundings, it was nothing compared to what happened next for him. Less than three weeks after signing for Argyle, he joined his new teammates on board a ship that crossed the Atlantic for the Pilgrims' four-week tour of Uruguay and Argentina, and his first game in an Argyle shirt came in a friendly against the famous Boca Juniors.

Although Wallace played regularly for the reserve side as both a winger and inside-forward over the following two seasons, he never graced the Home Park turf for a first team game (his only appearance was in an away match at Southend United in March 1925). He moved on to Torquay United, his last Football League club, in July 1926 (unhelpfully reported in the Western Morning News as Herbert Wallace).

Contemporary press refers to ROBERT Wallace not Bruce (WMN 13/5/24). His Argyle debut was against Boca Juniors! He did sign for Torquay on leaving Argyle (WMN 31/7/26 - calls him Herbert!) but serious illness meant he never made a first team appearance and he did not play in a reserve match until February 1928 (WMN 21/2/28).

Thanks Jon, I think you're right. The name 'Bruce' came from three sources: Football League Players; Records 1888-1939 (Joyce) , Plymouth Argyle - A Complete Record 1903-1989 (Knight) and The Argyle Book (Guswell & Robinson). However, I suspect that one of those 'fed' the other two. To confuse matters further, All About Argyle (Tonkin) says he was J. Wallace!

But as you say, the Western Morning News reported his signature on 12 May 1924 (not 13) and quite clearly said he was Robert. What's more, the PAFC Handbook of 1924-25 said he was R. Wallace and under his picture is the caption B. ...  More

Thanks Jon, I think you're right. The name 'Bruce' came from three sources: Football League Players; Records 1888-1939 (Joyce) , Plymouth Argyle - A Complete Record 1903-1989 (Knight) and The Argyle Book (Guswell & Robinson). However, I suspect that one of those 'fed' the other two. To confuse matters further, All About Argyle (Tonkin) says he was J. Wallace!

But as you say, the Western Morning News reported his signature on 12 May 1924 (not 13) and quite clearly said he was Robert. What's more, the PAFC Handbook of 1924-25 said he was R. Wallace and under his picture is the caption B. Wallace, so that suggests he was Robert/Bob. Complete speculation, but being a Scot, perhaps Bruce became a nickname from Robert the Bruce? As I say, complete speculation!

As a amusing aside, the WMN on 15 July 1924 gave an account of the trip to South America, quoting Bob Jack as saying "Everybody fit excepting Wallace who is intermittently upset by the sway of the ship. He has had very few comfortable days, and it will take a week or more on land to put him right."

Greens on Screen is run as a service to fellow supporters, in all good faith, without commercial or private gain.  I have no wish to abuse copyright regulations and apologise unreservedly if this occurs. If you own any of the material used on this site, and object to its inclusion, please get in touch using the 'Contact Us' button at the top of each page. Search facility powered by JRank Search Engine. Hover facility courtesy of Milonic. UK time at page load: 28 May 2022, 04:33.