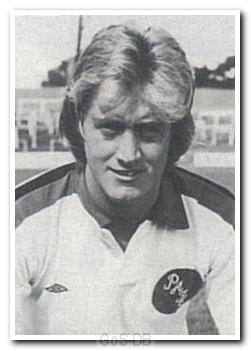 Came from: Arsenal   Went to: Aldershot

Born in Newport of Welsh-Maltese parentage, Vassallo became a schoolboy international for Wales and an apprentice with Arsenal, signing professional terms in May 1973. Without a first team opportunity at Highbury, he left London in November 1974, still only 18 years old, to sign for Tony Waiters' Argyle for £10,000. At Home Park he found the ever improving rising star of Paul Mariner an almost insurmountable obstacle and first team opportunities were very limited. He made just a handful of appearances in the 1974-75 promotion-wining side and after little over a dozen appearances and three goals in total, across two seasons, he left to join Aldershot. However he failed to make a first team appearance for The Shots and returned to Devon to sign for Barnstaple Town. In March 1977 he was offered the chance of a second shot in the League when he signed for Torquay United for £3,000, and in a three-year spell he played 46 times and scored four goals.

After playing his last League game for The Gulls in November 1978, he moved back into non-league football with Bridgend Town. Spells with Kidderminster Harriers, Merthyr Tydfil and Gloucester City followed before injury forced him to retire from the game. He was awarded a testimonial by Gloucester City in the 1987-88 season with an Arsenal team the visitors, attracting an impressive 3,952 crowd. After The Gunners' visit to Meadow Park he turned up at the stadium a few days later to collect his testimonial cheque only to be persuaded to play a first team match later that evening because of a player shortage. This wasn't a one-off either; he later came out of retirement to play for Newport County and Cinderford Town. After retiring fully and finally as a semi-professional player, he had three separate spells in charge of Chepstow Town, stretching over almost a decade. Starting in 1997, and with a spell managing Caldicot Town AFC in between, his third and last spell with Chepstow ended in July 2006.

Greens on Screen is run as a service to fellow supporters, in all good faith, without commercial or private gain.  I have no wish to abuse copyright regulations and apologise unreservedly if this occurs. If you own any of the material used on this site, and object to its inclusion, please get in touch using the 'Contact Us' button at the top of each page. Search facility powered by JRank Search Engine. Hover facility courtesy of Milonic. UK time at page load: 07 May 2021, 08:48.