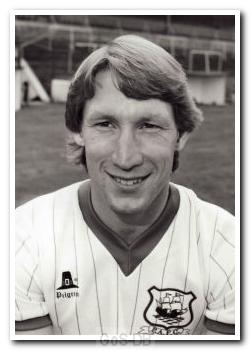 Born in Plymouth, Uzzell used to stand with his Argyle-loving father at the Barn Park End as a lad, watching the likes of Pat Dunne and Mike Bickle. His boyhood dreams were to become a professional footballer, and of course to play for his hometown club. His first chance to try out the Home Park turf came when he played for Plymouth Schools under-15s, and soon after he trained and had trials with Argyle. He left school and signed apprenticeship forms to be part of the excellent youth set-up at that time, under manager Tony Waiters and his staff, Keith Blunt and Bobby Howe. Five of the youngsters who began their apprenticeships with Uzzell - Martin Hodge, Kevin Hodges, Gary Megson, Kevin Smart and Mike Trusson - went on to graduate as professionals and play for the first team, with some progressing on to First and Second Division clubs. But for Uzzell it was all about Plymouth Argyle, as it was for record-breaker Kevin Hodges; together they accumulated nearly 1000 games in a total of 26 years.

Uzzell repaid the faith shown in him by giving the club 12 years of loyal and dependable first team service, beginning with an unusual July debut. This was the first match of the Anglo-Scottish Cup, a first team competition between eight English and four Scottish clubs played in the three weeks before the start of the conventional 1977-78 league season. The 18-year-old made quite an impression and went on to play at left-back in all but the last two of the club's 56 games that season. However, managers came thick and fast over the following campaigns, and Uzzell found himself favoured by some more than others. His best seasons came between 1981 and 1984, under Bobby Moncur and John Hore, and he was a key part of the 1984 FA Cup semi-final team. Injury ruled him out most of the 1985-86 promotion campaign, and after that he found himself in and out of the side over his final three seasons, often in central defence rather than on the left.

Uzzell's well-deserved testimonial game came in his tenth professional season when Argyle met Brian Clough's Nottingham Forest on a wet Tuesday night in November 1986. Throughout his career, what Uzzell lacked in finesse he more than made up in honesty, hard work and loyalty, which was why many an Argyle fan has a soft spot for 'Uuuuuzzell' and why Clough was so pleased to offer his side for the local lad's big night. A host of star names, including England internationals Stuart Pearce, Des Walker, Gary Birtles, and Nigel Clough, as well as future Argyle assistant manager Ian Bowyer, lined up to be thrashed 6-1, and when Uzzell left the field to a rousing ovation with five minutes remaining, Brian Clough met him near the touchline with a heart-warming embrace.

After 12 seasons and over 350 games for the club, Uzzell rejected a new contract and joined Torquay United in the summer of 1989. He played in 92 league games for the Gulls, ending in December 1991 when he suffered a horrific facial injury in a home match against Brentford, which after a unsuccessful and high-profile court case, also eventually forced his retirement from the game.

Greens on Screen is run as a service to fellow supporters, in all good faith, without commercial or private gain.  I have no wish to abuse copyright regulations and apologise unreservedly if this occurs. If you own any of the material used on this site, and object to its inclusion, please get in touch using the 'Contact Us' button at the top of each page. Search facility powered by JRank Search Engine. Hover facility courtesy of Milonic. UK time at page load: 04 July 2022, 11:05.