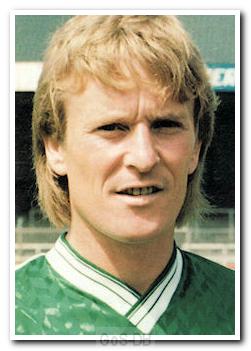 Note: Tynan's total goals is one fewer that some record books indicate. This is because they say that he scored twice against Leicester on 28 December 1987, but newspaper report agree that one was an own-goal.

Tommy Tynan is a true Argyle legend, remembered by fans as one of the club's all-time greats. He scored 291 goals in 704 senior professional matches, including 145 goals in 310 appearances for the Pilgrims. He was part of the 1984 team that reached the FA Cup semi-final and won the Player of the Year award three times. He also won the Third Division Golden Boot in 1984-85 as the division's leading goalscorer.

Tynan began his career under Bill Shankly in his native Liverpool after winning a talent competition in the local newspaper. After a loan spell with Swansea City and a summer with Dallas Tornado, he left Liverpool without making a first team appearance, joining Sheffield Wednesday. After two years there, and a short period with Lincoln City, he joined Newport County, forming a dynamic striking partnership with John Aldridge. His goalscoring record led to a move to Argyle in 1983 and he established himself as a prolific goalscorer.

After requesting a transfer for domestic reasons, Tynan moved to Rotherham in the summer of 1985. However, he came back to Argyle on loan towards the end of the 1985-86 season, scoring ten goals in nine appearances, which helped secure promotion to Division Two and a permanent return to Home Park early in the next campaign. Tynan enjoyed four more successful seasons at Argyle before re-joining manager Dave Smith at Torquay United in 1990, and then ended his career with a season at Doncaster Rovers.

Greens on Screen is run as a service to fellow supporters, in all good faith, without commercial or private gain.  I have no wish to abuse copyright regulations and apologise unreservedly if this occurs. If you own any of the material used on this site, and object to its inclusion, please get in touch using the 'Contact Us' button at the top of each page. Search facility powered by JRank Search Engine. Hover facility courtesy of Milonic. UK time at page load: 23 January 2022, 09:07.