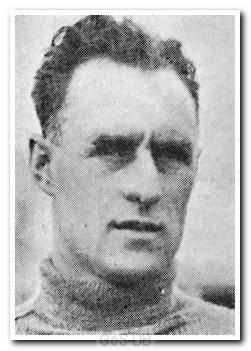 The Paulton-born forward was spotted by Bristol City playing for Paulton United and given his chance at Ashton Gate. He found chances hard to come by and moved to Blackburn Rovers in 1928, where he hit an impressive 37 goals in 63 games. This form earned him a move to Coventry City, where his prolific form continued. In his six seasons at Highfield Road, City scored 577 League goals and he weighed in with 173 of them in just 228 games - an astonishing record. To this day he remains the Sky Blue's greatest ever goal scorer and his picture is displayed - unveiled by his daughter - in the Legends' Lounge at the new Ricoh Arena. He also holds a record that is unlikely to be broken; being Coventry's - and indeed the League's - leading scorer in the 1931-32 season with a remarkable 49 goals in Division 3 South.

Bourton came to Home Park at the age of 29, but his stay was brief; after just a few months, he returned to his first League club, Bristol City, where he made a further 57 appearances until the war ended his career.

Greens on Screen is run as a service to fellow supporters, in all good faith, without commercial or private gain.  I have no wish to abuse copyright regulations and apologise unreservedly if this occurs. If you own any of the material used on this site, and object to its inclusion, please get in touch using the 'Contact Us' button at the top of each page. Search facility powered by JRank Search Engine. Hover facility courtesy of Milonic. UK time at page load: 17 May 2021, 17:17.