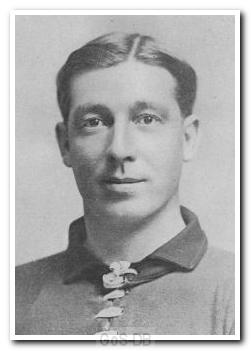 Note: Boden's total number of goals is one greater than in some publications. That's because of the match at home to Watford on 16 Dec 1911. Some books show the goalscorers as Raymond, Boden (2) and Burch (2) but contemporary newspapers show the 4th goal was scored by Boden not Burch, with Boden therefore getting a hat-trick.

Boden was born in Northwich in 1882 and played for local side Wharton Juniors, as well as hometown team Northwich Victoria, before beginning his professional career with Glossop in 1902. He spent three years with the Second Division side, making more than 90 appearances. In May 1905 he moved to Clapton Orient and played 33 times during the 1905-06 campaign, including the club's first Football League match in September 1905. In March 1906 Boden signed for Aston Villa but struggled to hold down a regular place in the first team. After just nineteen games in 15 months with the club he moved on, returning briefly to Northwich Victoria before signing for Reading in June 1907. In two years at Elm Park he played almost 70 times before joining Croydon Common in 1909.

He made twenty appearances for Croydon before joining Argyle in September 1910. Signed primarily as a half-back, Boden was an extremely versatile player and often played as a centre-forward. In fact, during his brief spell with Croydon he played in no less than six different positions - centre-half, centre-forward, right-back, left-back, right-half and left-half. His goalscoring record whilst at Home Park shows that he performed his duty with no little success and the 1911-12 club handbook describes that he "helped Argyle valuably at centre-forward last season, his terrific shooting securing many league points last back end". He again performed well up-front throughout the 1911-12 campaign, including scoring two hat-tricks, one of which was against his former club, Reading. Early on in the 1912-13 season Boden left Home Park to join Gillingham, where he spent the remainder of the campaign. In 1913 he returned to Northwich Victoria before ending his career with brief spells at Stalybridge Celtic and Witton Albion.

Greens on Screen is run as a service to fellow supporters, in all good faith, without commercial or private gain.  I have no wish to abuse copyright regulations and apologise unreservedly if this occurs. If you own any of the material used on this site, and object to its inclusion, please get in touch using the 'Contact Us' button at the top of each page. Search facility powered by JRank Search Engine. Hover facility courtesy of Milonic. UK time at page load: 17 May 2021, 16:48.