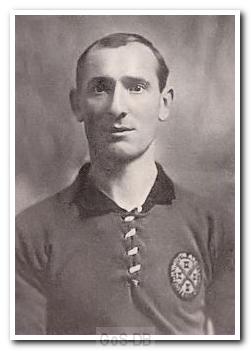 Thom was born in Dumfries in 1890 and played for his hometown side before heading south to join Argyle in 1911. A half-back, he spent eighteen months at Home Park but struggled to break into the first team, primarily assisting the reserves. In June 1913 he moved on to Southend United.

Prior to the image which you see of Maxwell on his profile, he was one of a group of players for whom GoS had no photo. In trying to trace one I noticed a posting about 'a' Maxwell Thom - a relatively unique name - on ancestry.com by a poster from Canada and duly contacted them. What I got back after some dialogue was not just a photo but a great insight into Maxwell's life once he left Argyle.

Hiya Andrew, Thom is not my main line but just a branch connection so I have not done significant research on Maxwell. However the Maxwell in my tree was a professional soccer player from family stories but later gave up and worked as a Lorry Driver for my Great Uncle where they hauled granite and explosives from Craignair Quarry to Dumfries and Stranraer areas etc.

Maxwell was born about 1890 in Dumfries, Dumfriesshire, Scotland. If I can help further, please write back".

The writer also put me in touch with another relative, who lived on the far East coast of Canada. This second relative confirmed:

"There were three Maxwell Thoms in the family. Two played football at the level in which you are interested".

Between them our correspondence provided GoS with a variant of the photo you see above as well as pictures of Maxwell in later life with his bowling trophies, relaxing in Glentrool (in the Scottish Borders) back in his native Dumfriesshire in the early 1950s, and of his headstone located in Dalbeattie, Scotland. Maxwell Thom passed away aged 77 on 9th December 1967.

These photos may be uploaded to GoS later if the 'Your Contribution' feature grows and the family consent.

A fascinating insight in what became of Maxwell post-Argyle.

Greens on Screen is run as a service to fellow supporters, in all good faith, without commercial or private gain.  I have no wish to abuse copyright regulations and apologise unreservedly if this occurs. If you own any of the material used on this site, and object to its inclusion, please get in touch using the 'Contact Us' button at the top of each page. Search facility powered by JRank Search Engine. Hover facility courtesy of Milonic. UK time at page load: 19 June 2021, 00:11.