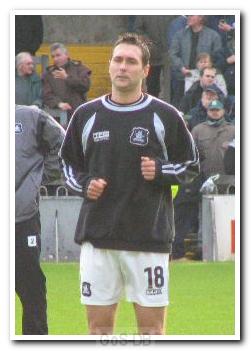 Taylor was a journeyman striker who spent just over a year at Argyle during a much-travelled career which saw him play for 11 league teams. Having started his career at non-league Staines Town, he joined Millwall, scoring twice as a 19-year-old for the Lions at Goodison Park to dump Everton out of the League Cup in 1995.

A year later, Taylor was sold to Bolton Wanderers but failed to break into the Trotters first team. He had loan spells with Rotherham United and Blackpool before a transfer to Tranmere Rovers, where he totted up over 100 games in three years and played in Rovers losing League Cup Final side in 2000.

A short stay at Stockport County followed before a free transfer to Blackpool, where he had a fantastic goalscoring record over the next three years. This form led Argyle to pay £100,000 for Taylor, but he did not enjoy the same success at Home Park and was sold to Paul Inces MK Dons for the same fee in 2006. Despite a bright start to his time in Milton Keynes he could not win a regular place in the team and had loan spells with Brentford and Rochdale before being released.

He then moved back into non-league football and played for Grays Athletic and Lewes before a return to Staines Town, after 14 years away. Away from the game, Taylor also trained as an electrician and worked for the Staines chairman. This didnt prevent Taylor from leaving his role as player/assistant manager at Town in the summer of 2014.

Greens on Screen is run as a service to fellow supporters, in all good faith, without commercial or private gain.  I have no wish to abuse copyright regulations and apologise unreservedly if this occurs. If you own any of the material used on this site, and object to its inclusion, please get in touch using the 'Contact Us' button at the top of each page. Search facility powered by JRank Search Engine. Hover facility courtesy of Milonic. UK time at page load: 07 May 2021, 14:18.