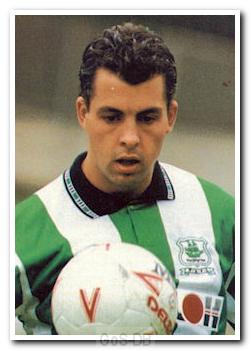 The retirement of a young footballer is always a sad event, but it proved to be the making of Paul Boardman. Signed by Peter Shilton in the summer of 1992 after being released by Liverpool and enduring spells in the rough and tumble of the Northern League, Boardman was a natural goalscorer. But sadly for the young Scouser, he was also naturally injury prone. He only managed three appearances in two seasons for The Pilgrims, but did manage a predatory strike against Bournemouth on a home debut that suggested Shilton may have unearthed a gem. However, more injuries were to follow and Boardman's Home Park exit was inevitable when his contract expired in May 1994, an event that led to him hanging up his boots. He went on to enjoy success as a stand-up comedian, but more notably as a presenter for Sky Sports.

Greens on Screen is run as a service to fellow supporters, in all good faith, without commercial or private gain.  I have no wish to abuse copyright regulations and apologise unreservedly if this occurs. If you own any of the material used on this site, and object to its inclusion, please get in touch using the 'Contact Us' button at the top of each page. Search facility powered by JRank Search Engine. Hover facility courtesy of Milonic. UK time at page load: 17 May 2021, 16:23.