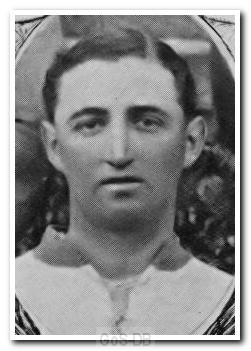 Born in Par, Cornwall, Symons was a footballer of some repute in the local game, having played for St Blazey, St Austell and Millbrook Rangers before joining Argyle in August 1919.

An inside-forward, the local press at the time reported that he had been playing for the Salonika Army side in the Army Championships at Aldershot before signing a Southern League contract with Argyle. His first outing for the club came in a scratch trial match against Munster Regiment at Home Park.

He went on to play for Argyle in the first two seasons after World War One, mainly for the reserve side but he did make one appearance for the first team before moving on to Oreston Rovers.

Greens on Screen is run as a service to fellow supporters, in all good faith, without commercial or private gain.  I have no wish to abuse copyright regulations and apologise unreservedly if this occurs. If you own any of the material used on this site, and object to its inclusion, please get in touch using the 'Contact Us' button at the top of each page. Search facility powered by JRank Search Engine. Hover facility courtesy of Milonic. UK time at page load: 18 June 2021, 16:11.