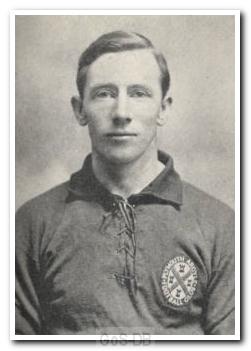 Sutherland was born in Falkirk in 1884. He served with the Argyll and Sutherland Highlanders in the South African Campaign and was a keen footballer and gym instructor for his regiment. It was whilst serving with the Highlanders in 1908, at Gillingham, that his skills were spotted by Southend United manager Bob Jack. On leaving the Army he signed for Southend and in three seasons with the club had a fine goalscoring record from his position at inside-forward.

In August 1911 he re-joined Jack at Home Park, signing for a fee of £100, and the club handbook stated that he "plays with keenness and intelligence, passes perfectly and is a dribbler of exceptional merit." However, he could not break into the Argyle first team in just over two years with the club, but was described as "indispensable to the reserve team". In December 1913 he moved on to Chatham but when war broke out a few months later he immediately re-enlisted with his old regiment. Just four days after the British Army first encountered the enemy, on August 26th 1914, Sergeant William Sutherland was killed in action during the Battle of Le Cateau.

Greens on Screen is run as a service to fellow supporters, in all good faith, without commercial or private gain.  I have no wish to abuse copyright regulations and apologise unreservedly if this occurs. If you own any of the material used on this site, and object to its inclusion, please get in touch using the 'Contact Us' button at the top of each page. Search facility powered by JRank Search Engine. Hover facility courtesy of Milonic. UK time at page load: 19 June 2021, 01:12.