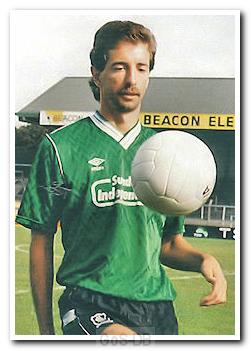 Summerfield joined West Bromwich Albion as an apprentice in 1976 and featured in the FA Youth Cup winning team in his first season. This brought him to the attention of the England Youth selectors, and he won six caps in 1976 and 1977. With first team chances limited at the Hawthorns, he signed for Birmingham City in 1982, and a few months later, moved to hometown club Walsall. He enjoyed a successful 18 months at Fellows Park, scoring 17 goals in 42 appearances, before a transfer to Cardiff City. Just six months later, Dave Smith brought him to Home Park.

Despite a slow start, 'Summers' soon made his mark as an unorthodox yet effective player. A forward for most of his career, he moved deeper into midfield, where his ability to turn a match with a single pass or make a run past opponents without them noticing made him the rock around which the midfield was built. He enjoyed five successful years at the club and played an important part in the 1985-86 promotion season. A broken leg, sustained in the FA Cup replay at Everton in January 1989, was the start of a year on the sidelines, and despite returning to full fitness, he never regained his earlier form. A change of management led to a move to Exeter City on loan, and then a permanent transfer to Shrewsbury Town, where he played over 150 games and became club captain. He played his last game six years later, at the age of 37, and then joined the Shrews' coaching staff.

Summerfield returned to Home Park in 1997 as youth team coach, and three years later began his first spell as Argyle's caretaker manager after the dismissal of Kevin Hodges. Paul Sturrock's subsequent appointment, with Summerfield as his assistant, heralded one of the most successful periods in the club's history. Four years later, after briefly holding the fort for the second time, he followed Luggy to Southampton, Sheffield Wednesday and Swindon Town.

In November 2007 Summerfield returned for two more years at Home Park, once again as Paul Sturrock's right-hand man before leaving in a shake-up, which saw Paul Mariner return to Plymouth as Head Coach. Summers had found his niche as a trusted second-in-command and joined Tranmere Rovers in 2010 as assistant to Les Parry, before taking up a similar role in 2012 at Burton Albion under Gary Rowett. In October 2014 he followed Rowett to Birmingham City, again as his assistant, but lost his job when Rowett and three other staff were sacked by Birmingham City in December 2016.

In March 2017, Summerfield again took the assistant manager's job under Gary Rowett, this time at Derby County in the Championship.

Greens on Screen is run as a service to fellow supporters, in all good faith, without commercial or private gain.  I have no wish to abuse copyright regulations and apologise unreservedly if this occurs. If you own any of the material used on this site, and object to its inclusion, please get in touch using the 'Contact Us' button at the top of each page. Search facility powered by JRank Search Engine. Hover facility courtesy of Milonic. UK time at page load: 29 June 2022, 21:10.