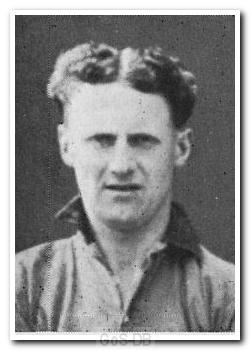 2. Came from: Career interrupted by WW2   Went to: Torquay United

Ellis Stuttard will be remembered by most for his two spells as Argyle's manager, but as a younger man he also played for the club at full-back and at wing half.

Born in Padiham, Lancashire, Stuttard was signed at 17 years old by his local side Burnley, but he failed to get a first team chance and moved to Home Park a year later under Jack Tresadern. However, after just a single appearance in the 1938-39 season, his career was cut short by the Second World War. He appeared in the 1939-40 South West Regional League before serving in the RAF during the War. He next played at the end of hostilities in the Football League South season in 1945-46 before adding a further 28 full Football League appearances the following season. Oddly, both his pre-war and post-war League debuts were home matches against West Ham United. Released by Argyle at the end of the 1946-47 campaign, he spent three seasons with Torquay United, making 82 appearances for the Gulls before winding down with Bideford and Mousehole.

On retiring as a player, he went into coaching and management, gaining some experience as assistant manager at Swindon Town before rejoining Argyle as assistant trainer. When Neil Dougall stepped down, Stuttard accepted the role of manager in November 1961. His first season in charge saw the Pilgrims soar towards the top of the table but sadly the momentum was lost and they ended up in fifth. The 1962-1963 campaign was more mundane, with a mid-table finish, and the following season the storm clouds gathered. By the end of September 1963, Argyle had failed to win and Stuttard stepped down. He initially stayed at Home Park, though, acting as assistant to Andy Beattie. However, following his resignation later in 1963, he became manager of Third Division strugglers Exeter City. Although they were relegated at the end of that season, he stayed there until the end of 1965-1966, leading them to a total of just sixteen wins and 29 draws in 64 matches. Finding himself out of work again, he was soon brought back to Home Park as chief scout for Billy Bingham.

When Bingham left Home Park in 1970, Stuttard was re-appointed manager. His second spell in charge lacked the fireworks of his first, Argyle finishing sixteenth in 1969-1970 and moving up one place the following year. In 1971-1972, they reached a respectable eighth, but by October 1972 another poor start to a season saw the board decide that a new broom was needed. He returned to the chief scout job, a role in which he truly excelled.

Stuttard remained at Home Park for the following ten years, serving the club in various capacities, and was awarded a testimonial match against Nottingham Forest in November 1979. Upon being made redundant as an economy measure in 1982, he went back home to Burnley and died there two years later. He was just 64 years old.

Greens on Screen is run as a service to fellow supporters, in all good faith, without commercial or private gain.  I have no wish to abuse copyright regulations and apologise unreservedly if this occurs. If you own any of the material used on this site, and object to its inclusion, please get in touch using the 'Contact Us' button at the top of each page. Search facility powered by JRank Search Engine. Hover facility courtesy of Milonic. UK time at page load: 28 May 2022, 05:52.