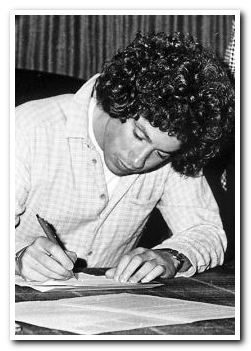 The Stepney-born midfielder played for ten League clubs in his career, failing to put down roots anywhere for very long. Of Jewish faith, he was at one stage in the early 1980s offered a contract and Israeli citizenship by Maccabi Tel Aviv under the 'Law of Return' in the then 'no-foreigners' Israeli top-flight, but declined once it became apparent that he would also have to serve in the Israeli Army. Silkman started his career with non-league Barnet before coming to the attention of League new boys Hereford United in 1974, where he played 37 times. Moving to Crystal Palace in 1976, he played 48 times before moving to Home Park in October 1978, signed by Malcolm Allison.

Silkman's silky skills endeared him to the Home Park faithful, but when Allison left for Manchester City the following January, the new man at the helm, Bobby Saxton, was less impressed. He was loaned briefly to Luton Town before following Allison to Maine Road, with Argyle making a handsome profit out of his five-month stay. With City struggling in the top flight, the move didn't work out and with just 19 appearances and 3 goals to his name, he moved to Brentford in 1980. After just 14 appearances for the Griffin Park side, Silkman moved on again, this time to Queens Park Rangers for the remainder of the 1980-81 season, where he played 23 times. A rare period of stability then followed with Leyton Orient, for whom he played 140 times, scoring 15 goals in a four-year stay. He then played 40 games for Southend United in the 1985-86 season before two final appearances as a non-contract player with Crewe Alexandra in 1986. He later wound down his career with non-league Wycombe Wanderers before moving to Staines Town.

After retiring from the game, Silkman became a successful greyhound trainer, Sky Sports pundit and a licensed football agent. He was cited in the 2007 Lord Stevens' Report into transfer 'bungs' through his relationship with controversial fellow agent, Pinhas Zahavi. He also attracted notoriety in 2008 when taped transcripts of an unsavoury spat with the late Sir Bobby Robson were publicly released after both parties fell out over the transfer of Chilean striker Clarence Acuna to Newcastle United in 2001.

He only played 15 games for us, but Silkman is THE player who epitomised this era of supporting Argyle. Only Malcolm Allison could have brought him here, and how glad I was he did.

I still remember him now, jinking around the midfield with his socks down around his ankles, his shirt hanging down past his shorts and his mop of curly black hair.

Gordon Nisbet is my all-time favourite player but this lad just ignited my love of the beautiful game.

Wonderful player and wonderful times to be an Argyle fan.

Barry Silkman scored 2 goals for Argyle and they were both crackers. His goal against Watford was a jinking run followed by a belting 25 yard shot and remains one of the great goals I have ever seen at HP. I am sure that Westward TV (as I think it was then) had film of it. It would be lovely if that footage could be dug up.

I have to say I loved every minute of playing for Argyle, even under Bobby Saxton. Great supporters and great staff at the club. Will never forget it and good luck for the future you all deserve it.

Barry Silkman was a thrilling player to watch - always socks down but players hardly got close enough to kick him. He was just immense and I have been following Argyle since 1968. Best player I have ever seen playing for Argyle. Thanks Barry.

I have a lovely old memory of Barry when he was with Hereford United; I took him out for a drink once and turned up to collect him on my motorcycle. I think he was very brave to ride pillion with a lady rider! I can still hear his voice from behind shouting how I was messing up his hair. Always was a dapper lad, even with the afro. That was a long time ago, but has lifted my spirits again to recall it.

Greens on Screen is run as a service to fellow supporters, in all good faith, without commercial or private gain.  I have no wish to abuse copyright regulations and apologise unreservedly if this occurs. If you own any of the material used on this site, and object to its inclusion, please get in touch using the 'Contact Us' button at the top of each page. Search facility powered by JRank Search Engine. Hover facility courtesy of Milonic. UK time at page load: 28 October 2021, 00:24.