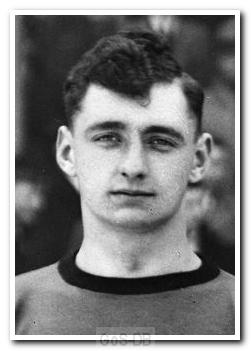 1. Came from: Southport   Went to: Career interrupted by WW2

2. Came from: Career interrupted by WW2   Went to: Newquay

Silk was born in Orrell Park in Liverpool and started out with local side Miranda. He moved to Southport in 1935 and went on to make 14 appearances for the Haig Avenue side. Two years later he arrived at Home Park, making nine appearances for the Pilgrims before the Second World War interrupted the League programme. He went on to make 28 appearances in the South West Regional League in 1939-40, but that was to be Argyle's last season for five years.

After the cessation of hostilities he became a first team regular, missing only one game of the Football League South campaign of 1945-46 prior to the resumption of the full League programme the following season. He carried on competing for the right-back shirt, usually with Paddy Radcliffe, until finally losing out in 1951. His solitary career goal came in a home match against West Ham in February 1949 when a trademark clearance from one side of the pitch, near the half way line, bounced into the opponent's area and was misjudged by the Hammers' keeper.

When he left Home Park in 1952 to join Newquay as their player-manager, he was the last remaining member of Argyle's pre-war staff.

In addition to playing for Argyle, George owned a Sweet Shop in Regent Street close to Sutton High School. To boost his trade George hit on the idea of bringing back some unused programmes from away games. In those days these were like gold dust to schoolboys as there was little away travel.

The ritual was simple; you bought your sweets and then said "Have you any programmes Mr Silk?" Sometimes you were lucky, sometimes not. George was a shrewd operator who made sure that they were spread around which increased the demand. A lot of my pocket money went his way, fortunately without ruining my teeth.

Greens on Screen is run as a service to fellow supporters, in all good faith, without commercial or private gain.  I have no wish to abuse copyright regulations and apologise unreservedly if this occurs. If you own any of the material used on this site, and object to its inclusion, please get in touch using the 'Contact Us' button at the top of each page. Search facility powered by JRank Search Engine. Hover facility courtesy of Milonic. UK time at page load: 17 May 2021, 17:22.