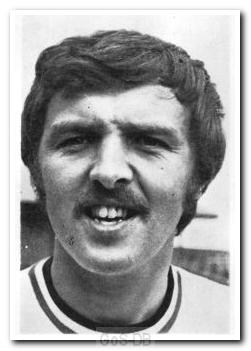 Saxton was brought to Home Park from Derby County for £12,000 in 1968, having begun his career in non-league football with Gainsborough and Denaby United. His arrival at Home Park was too late, however, to prevent the Pilgrims from sliding into Division Three. More disappointment followed a year later when a broken leg, sustained in a car accident, kept him out of action for a year. The good times arrived when he was the driving force in Argyle reaching the League Cup Semi-Final and again during the promotion season of 1974-75. A whole-hearted and dedicated footballer, Saxton was strong in the tackle and a totally committed Argyle player for over seven years. He joined Exeter City in 1975, becoming player-manager, and returned to Home Park as boss in 1979.

In his two years at the helm, the Pilgrims kept a steady course, finishing fifteenth in 1979-80 and seventh in 1980-81. Players signed under him included Dave Kemp and Geoff Crudgington. In the summer of 1981 Saxton left Argyle for Blackburn Rovers, where he remained in charge for nearly six years, all of them in the Second Division. He then took over at York City from June 1987 until the end of September 1988. This was his last managerial position though he was briefly caretaker manager of Newcastle United in 1991.

After leaving York, Saxton stayed in football, most notably as assistant manager to future Argyle boss Peter Reid at Sunderland between 1995 and 2002. In 2006, he famously came out of retirement to assist Niall Quinn, then acting manager at the Stadium of Light. Saxton continued to scout occasionally for both Newcastle and Sunderland.

Greens on Screen is run as a service to fellow supporters, in all good faith, without commercial or private gain.  I have no wish to abuse copyright regulations and apologise unreservedly if this occurs. If you own any of the material used on this site, and object to its inclusion, please get in touch using the 'Contact Us' button at the top of each page. Search facility powered by JRank Search Engine. Hover facility courtesy of Milonic. UK time at page load: 17 May 2021, 16:51.