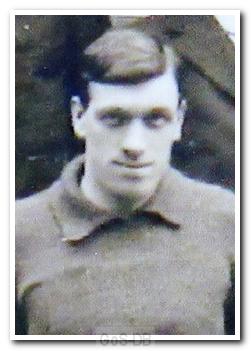 Note: W.S. Tonkin's 'All About Argyle' lists him as T. Roadley and with Argyle in 1914. Newspaper reports and a Loughborough Corinthians team photo prove that he was A. Roadley, playing two games for Argyle in 1919.

Roadley was born in Loughborough in 1891. Newspaper reports show him playing in goal for Loughborough Corinthians 20 years later and he was a member of the Corinthians side that won the Leicestershire Senior League Championship in 1912-1913. In the following season he played at least once for Leicestershire side Whitwick Imperial.

Roadley appeared in an Argyle pre-season trial match in August 1919 and was reported to have had "a sound game". Three weeks later he played in goal in two Southern League games, covering for the injured Fred Craig, whilst also serving in the Royal Navy according to W.S. Tonkin's 'All About Argyle'. But his stay in Plymouth was short-lived; newspaper reports in November 1919 show that he was back playing for Loughborough Corinthians.

Footnote: the image is an extract of a photo of the Loughborough Corinthians team that won the Leicestershire Senior Cup six years before his time in Plymouth. Grateful thanks to volunteers at Loughborough Library for their help.

Greens on Screen is run as a service to fellow supporters, in all good faith, without commercial or private gain.  I have no wish to abuse copyright regulations and apologise unreservedly if this occurs. If you own any of the material used on this site, and object to its inclusion, please get in touch using the 'Contact Us' button at the top of each page. Search facility powered by JRank Search Engine. Hover facility courtesy of Milonic. UK time at page load: 19 June 2021, 02:10.