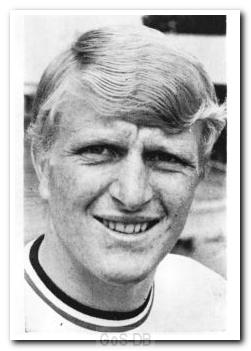 Came from: Junior   Went to: Bournemouth

Local boy Rickard originally signed for Argyle at the age of 15, but was released and played for Torpoint and St Austell. After returning to the club three years later, he made such an impact that he was named Player of the Year in 1970, despite playing just half of the season. Injuries severely disrupted his time at Home Park and after falling out favour following the arrival of Tony Waters, he was sold to Bournemouth. Two years later he retired and went on to play non-league football for Falmouth Town and Saltash United.

Rickard will perhaps be best remembered for his goal in Argyle's FA Cup Fourth Round 2-1 defeat at Leeds United on 3 February 1973 (cup winners the previous season, Leeds United went on to the final only to be defeated 1-0 by Sunderland) and for scoring Argyle's second goal in their 3-2 victory over Santos in a friendly at Home Park on 14 March 1973.

Greens on Screen is run as a service to fellow supporters, in all good faith, without commercial or private gain.  I have no wish to abuse copyright regulations and apologise unreservedly if this occurs. If you own any of the material used on this site, and object to its inclusion, please get in touch using the 'Contact Us' button at the top of each page. Search facility powered by JRank Search Engine. Hover facility courtesy of Milonic. UK time at page load: 07 May 2021, 20:43.