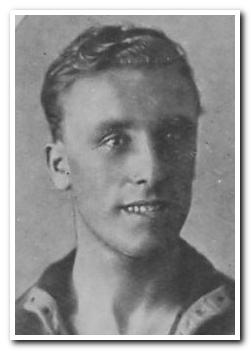 Joining Argyle for the club's second campaign in League football, Richardson was one of a trio of players signed from Barking Town in the summer of 1921 (Jack Leslie and Alf Rowe being the others). Unlike his colleagues from East London, the centre-foward made an immediate impact; in his first season he was almost ever-present and chalked up 31 goals. He spent less than two seasons at Home Park, but in that time achieved a historic pair of firsts: the first Argyle player to score a League hat-trick, away at Bristol Rovers in August 1921, and the first Argyle player to score a FA Cup hat-trick when he scored four at home to Bradford Park Avenue in February 1923.

Richardson was Argyles first truly great goalscorer in League football, and with a better than one-in-two record, it was no surprise when other clubs showed their interest. He was lured away by Stoke City, with whom he completed the remainder of the 1922-23 season, before returning closer to home with West Ham United later in 1923. Remaining prolific throughout his career, Richardson later played for Swindon Town and Reading before a second spell back at Swindon prior to moving to his last club, Mansfield Town.

Greens on Screen is run as a service to fellow supporters, in all good faith, without commercial or private gain.  I have no wish to abuse copyright regulations and apologise unreservedly if this occurs. If you own any of the material used on this site, and object to its inclusion, please get in touch using the 'Contact Us' button at the top of each page. Search facility powered by JRank Search Engine. Hover facility courtesy of Milonic. UK time at page load: 17 May 2021, 17:19.