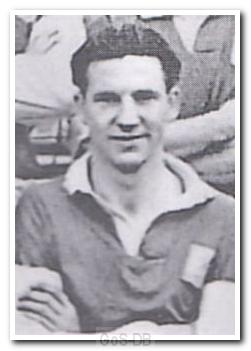 After beginning his career with Scottish junior side Rutherglen Glencairn in Glasgow, Rattray spent four years with Dundee. He moved to Argyle in a swap deal with Stan Williams and, despite taking a little while to settle in, became an indispensable member of the team. A tall inside-forward, he had surprisingly good ability for his size and was a major part of the promotion winning team of 1951-52, scoring 19 goals. Despite the success, he requested a transfer at the end of the season and moved to Norwich City. A little over a year later, after a less successful spell in East Anglia, he returned to Scotland with Stirling Albion, near his hometown of Bannockburn. He spent two years there before ending his career at St Johnstone.

Greens on Screen is run as a service to fellow supporters, in all good faith, without commercial or private gain.  I have no wish to abuse copyright regulations and apologise unreservedly if this occurs. If you own any of the material used on this site, and object to its inclusion, please get in touch using the 'Contact Us' button at the top of each page. Search facility powered by JRank Search Engine. Hover facility courtesy of Milonic. UK time at page load: 03 December 2021, 13:31.