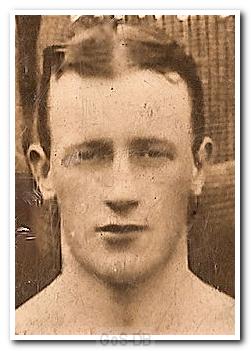 Prout was born in Fulham in 1888 and began his career with local side Silverdale. He represented West London Schools and also played for Fulham Amateurs and Fulham Old Town before a spell with Tunbridge Wells Rangers. In 1907 he joined Fulham but made just seven League appearances for the club before moving on to Stockport County three years later. A versatile performer, he could play at right-half, inside-right and centre-forward and scored 17 times in 35 games during his first season with the Hatters, including two on his debut.

Over the next 18 months however, his first team chances became more limited and in September 1912 he was suspended by the club for "subordination and a breach of training rules". He was then sacked for "gross misconduct" the following month, his behaviour possibly explained by reports that his brother had recently died after being in an accident whilst playing football. Leaving Edgeley Park after 19 goals in 59 games, Prout joined Argyle in November 1912. After only occasional appearances, he left Home Park at the end of the 1912-13 campaign, with Argyle his last recorded club.

Greens on Screen is run as a service to fellow supporters, in all good faith, without commercial or private gain.  I have no wish to abuse copyright regulations and apologise unreservedly if this occurs. If you own any of the material used on this site, and object to its inclusion, please get in touch using the 'Contact Us' button at the top of each page. Search facility powered by JRank Search Engine. Hover facility courtesy of Milonic. UK time at page load: 19 June 2021, 00:16.