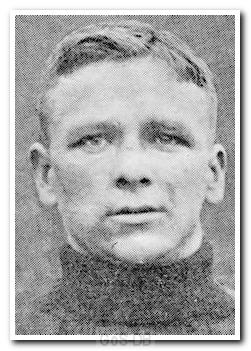 Born in Woking, Prescott was playing for his hometown team when given the chance by Argyle in 1935. However, he made just three appearances across two seasons before moving to Torquay United, where he fared much better. In a further two seasons in Devon he played 35 times and scored nine goals for the Gulls, and then at the age of 23, the Second World War ended his Football League career.

Although he may have been known by the fans as Fred, his real name was Frank. As a player, he was also referred to as Peggy, apparently a reference to the way he ran.

Like many players of this generation, his playing career was ended by the War, but he continued to be involved in the game post-war as a coach.

Greens on Screen is run as a service to fellow supporters, in all good faith, without commercial or private gain.  I have no wish to abuse copyright regulations and apologise unreservedly if this occurs. If you own any of the material used on this site, and object to its inclusion, please get in touch using the 'Contact Us' button at the top of each page. Search facility powered by JRank Search Engine. Hover facility courtesy of Milonic. UK time at page load: 03 December 2021, 11:05.