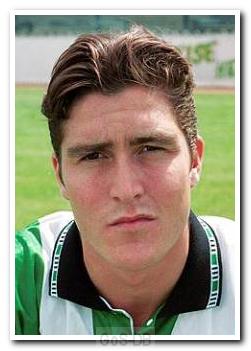 Argyle fans were treated to some special right-backs in the 1980s and '90s  with Gordon Nisbet and Mark Patterson arguably chief among them for loyal, sterling service. But arguably the most talented of all was Gary Poole, who stayed at the club for just one season and made fewer than 40 league appearances. His arrival at Home Park in the summer of 1992 was almost comical in nature. After failing to agree a new contract at Barnet, controversial Underhill chairman Stan Flashman bizarrely granted his most saleable asset a free transfer  much to the annoyance of manager Barry Fry. Argyle boss Peter Shilton, embarking on a squad overhaul following relegation, pounced before the many other interested parties could act.

The 1992-93 season was an inconsistent one for Shilton's men, as expensive summer signings such as Paul Dalton and Steve Castle struggled with injuries. But a rare ray of sunshine was the outstanding Poole. A cultured, athletic player, the former Tottenham apprentice was awarded the Argyle captaincy following the exit of Nicky Marker, and certainly led by example  scoring five goals by the end of October and marshalling Argyle's right flank in commanding style. A magnificent goal against Luton Town, in which he curled a side-footed shot into the far corner of the net from outside the area, illustrated the sort of qualities that saw Premier League Leeds United enquire about his availability. Shilton snubbed that approach, but by season's end his transfer budget had been drastically cut and he was forced to reluctantly accept a £350,000 offer from Southend United to fund another summer transfer spree.

Poole's career never quite reached the heights his form at Home Park suggested it would. He later signed for Birmingham City, playing against Argyle as his new team won the third-tier championship, and then joined Charlton Athletic. He made a handful of appearances as The Addicks gained promotion to the Premier League, but a serious knee injury denied him the chance to play in the top flight, and eventually led to his retirement at the age of 32. He pursued his coaching badges, but went on to become a director of an investment company.

Greens on Screen is run as a service to fellow supporters, in all good faith, without commercial or private gain.  I have no wish to abuse copyright regulations and apologise unreservedly if this occurs. If you own any of the material used on this site, and object to its inclusion, please get in touch using the 'Contact Us' button at the top of each page. Search facility powered by JRank Search Engine. Hover facility courtesy of Milonic. UK time at page load: 20 June 2021, 03:48.